Most investors tend to think that hedge funds and other asset managers are worthless, as they cannot beat even simple index fund portfolios. In fact, most people expect hedge funds to compete with and outperform the bull market that we have witnessed over the past few years. However, hedge funds are generally partially hedged and aim at delivering attractive risk-adjusted returns rather than following the ups and downs of equity markets hoping that they will outperform the broader market. Our research shows that hedge funds do have great stock picking skills, so let’s take a glance at the smart money sentiment towards J.B. Hunt Transport Services, Inc. (NASDAQ:JBHT).

J.B. Hunt Transport Services, Inc. (NASDAQ:JBHT) investors should be aware of an increase in hedge fund sentiment of late. Our calculations also showed that jbht isn’t among the 30 most popular stocks among hedge funds.

What have hedge funds been doing with J.B. Hunt Transport Services, Inc. (NASDAQ:JBHT)?

At the end of the third quarter, a total of 29 of the hedge funds tracked by Insider Monkey held long positions in this stock, a change of 4% from the second quarter of 2018. The graph below displays the number of hedge funds with bullish position in JBHT over the last 13 quarters. So, let’s see which hedge funds were among the top holders of the stock and which hedge funds were making big moves. 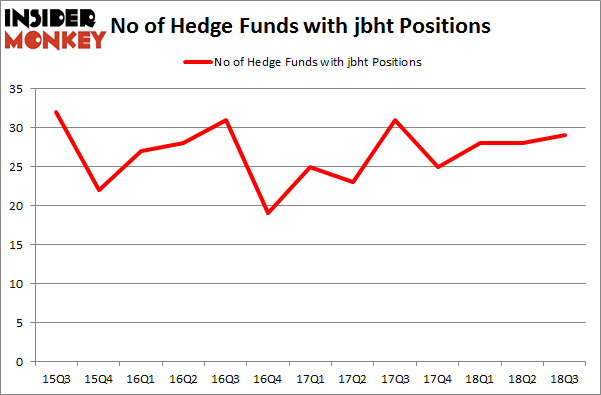 According to publicly available hedge fund and institutional investor holdings data compiled by Insider Monkey, Park Presidio Capital, managed by Lee Hicks and Jan Koerner, holds the biggest position in J.B. Hunt Transport Services, Inc. (NASDAQ:JBHT). Park Presidio Capital has a $73.1 million position in the stock, comprising 7.4% of its 13F portfolio. Sitting at the No. 2 spot is Greg Poole of Echo Street Capital Management, with a $44.4 million position; the fund has 1% of its 13F portfolio invested in the stock. Other peers that are bullish encompass Jim Simons’s Renaissance Technologies, Peter Rathjens, Bruce Clarke and John Campbell’s Arrowstreet Capital and John Overdeck and David Siegel’s Two Sigma Advisors.

As one would reasonably expect, key hedge funds have been driving this bullishness. Precision Path Capital, managed by Ilya Boroditsky, assembled the most valuable position in J.B. Hunt Transport Services, Inc. (NASDAQ:JBHT). Precision Path Capital had $8.3 million invested in the company at the end of the quarter. Matthew Tewksbury’s Stevens Capital Management also made a $7.8 million investment in the stock during the quarter. The other funds with new positions in the stock are David Costen Haley’s HBK Investments, Sara Nainzadeh’s Centenus Global Management, and Matthew Hulsizer’s PEAK6 Capital Management.

As you can see these stocks had an average of 29 hedge funds with bullish positions and the average amount invested in these stocks was $1.76 billion. That figure was $345 million in JBHT’s case. Vistra Energy Corp. (NYSE:VST) is the most popular stock in this table. On the other hand Coca-Cola FEMSA, S.A.B. de C.V. (NYSE:KOF) is the least popular one with only 8 bullish hedge fund positions. J.B. Hunt Transport Services, Inc. (NASDAQ:JBHT) is not the least popular stock in this group but hedge fund interest is still below average. This is a slightly negative signal and we’d rather spend our time researching stocks that hedge funds are piling on. In this regard VST might be a better candidate to consider a long position.

Should You Buy Kohl’s Corporation (KSS)?
Monthly Newsletter Strategy
Download a free copy of our newsletter and see the details inside!
Hedge Fund Resource Center
Related News
Top 15 Biggest Logistics Companies In The World in 2017 11 Most Profitable Trucking Companies In America 14 Dividend Growth Stocks Rewarding Shareholders With A Raise Do Hedge Funds Love J.B. Hunt Transport Services Inc (JBHT)? Influential Insiders at Well-Known Freight Trucking Company and Ultratech Inc. (UTEK) Discard Shares, Plus Insider Buying at Other Companies Here’s How These Companies Did For Their Latest Earnings Results Cheap Gasoline Is Not Enough to Get Hedge Funds Into Trucking Stocks The 10 Best Islands to Visit in 2019 5 Most Socially Responsible Companies in America 5 Ways You Can Eliminate Credit Card Debt
Billionaire Hedge Funds