Investing in small cap stocks has historically been a way to outperform the market, as small cap companies typically grow faster on average than the blue chips. That outperformance comes with a price, however, as there are occasional periods of higher volatility. The one and a half month time period since the end of the third quarter is one of those periods, as the Russell 2000 ETF (IWM) has underperformed the larger S&P 500 ETF (SPY) by about 4 percentage points. Given that the funds we track tend to have a disproportionate amount of their portfolios in smaller cap stocks, they have seen some volatility in their portfolios too. Actually their moves are potentially one of the factors that contributed to this volatility. In this article, we use our extensive database of hedge fund holdings to find out what the smart money thinks of Itau Unibanco Holding SA (NYSE:ITUB).

Hedge fund interest in Itau Unibanco Holding SA (NYSE:ITUB) shares was flat at the end of last quarter. This is usually a negative indicator. At the end of this article we will also compare ITUB to other stocks including Becton, Dickinson and Company (NYSE:BDX), The TJX Companies, Inc. (NYSE:TJX), and Eni SpA (NYSE:E) to get a better sense of its popularity.

What have hedge funds been doing with Itau Unibanco Holding SA (NYSE:ITUB)?

At the end of the third quarter, a total of 15 of the hedge funds tracked by Insider Monkey were bullish on this stock, representing no change from the previous quarter. On the other hand, there were a total of 18 hedge funds with a bullish position in ITUB at the beginning of this year. With the smart money’s capital changing hands, there exists a select group of notable hedge fund managers who were upping their holdings substantially (or already accumulated large positions). 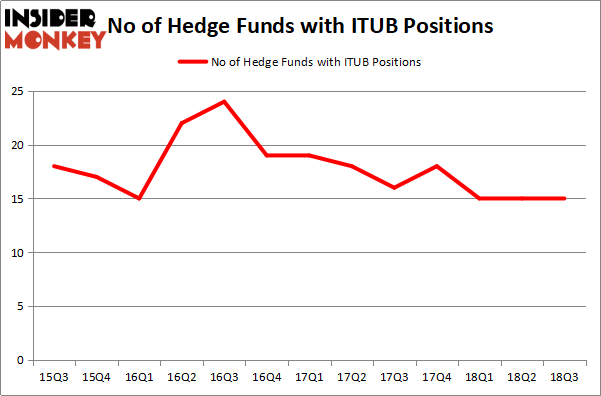 Among these funds, Fisher Asset Management held the most valuable stake in Itau Unibanco Holding SA (NYSE:ITUB), which was worth $291.8 million at the end of the third quarter. On the second spot was Capital Growth Management which amassed $108.4 million worth of shares. Moreover, Oaktree Capital Management, Driehaus Capital, and GLG Partners were also bullish on Itau Unibanco Holding SA (NYSE:ITUB), allocating a large percentage of their portfolios to this stock.

Judging by the fact that Itau Unibanco Holding SA (NYSE:ITUB) has experienced bearish sentiment from the entirety of the hedge funds we track, logic holds that there was a specific group of fund managers who were dropping their full holdings last quarter. Intriguingly, Peter Rathjens, Bruce Clarke and John Campbell’s Arrowstreet Capital said goodbye to the biggest investment of the 700 funds followed by Insider Monkey, comprising close to $92.4 million in stock. Jim Simons’s fund, Renaissance Technologies, also dropped its stock, about $54.8 million worth. These bearish behaviors are intriguing to say the least, as total hedge fund interest stayed the same (this is a bearish signal in our experience).

As you can see these stocks had an average of 25.75 hedge funds with bullish positions and the average amount invested in these stocks was $1.15 billion. That figure was $669 million in ITUB’s case. The TJX Companies, Inc. (NYSE:TJX) is the most popular stock in this table. On the other hand Westpac Banking Corporation (NYSE:WBK) is the least popular one with only 6 bullish hedge fund positions. Itau Unibanco Holding SA (NYSE:ITUB) is not the least popular stock in this group but hedge fund interest is still below average. This is a slightly negative signal and we’d rather spend our time researching stocks that hedge funds are piling on. In this regard TJX might be a better candidate to consider a long position.