There are several ways to beat the market, and investing in small cap stocks has historically been one of them. We like to improve the odds of beating the market further by examining what famous hedge fund operators such as Jeff Ubben, George Soros and Carl Icahn think. Those hedge fund operators make billions of dollars each year by hiring the best and the brightest to do research on stocks, including small cap stocks that big brokerage houses simply don’t cover. Because of Carl Icahn and other elite funds’ exemplary historical records, we pay attention to their small cap picks. In this article, we use hedge fund filing data to analyze istar Inc (NYSE:STAR).

istar Inc (NYSE:STAR) shares haven’t seen a lot of action during the third quarter. Overall, hedge fund sentiment was unchanged. The stock was in 8 hedge funds’ portfolios at the end of December. The level and the change in hedge fund popularity aren’t the only variables you need to analyze to decipher hedge funds’ perspectives. A stock may witness a boost in popularity but it may still be less popular than similarly priced stocks. That’s why at the end of this article we will examine companies such as Nexgen Energy Ltd. (NYSE:NXE), Accelerate Diagnostics Inc (NASDAQ:AXDX), and Winmark Corporation (NASDAQ:WINA) to gather more data points.

To most market participants, hedge funds are viewed as unimportant, outdated investment vehicles of yesteryear. While there are more than 8000 funds in operation today, We hone in on the bigwigs of this group, around 750 funds. It is estimated that this group of investors shepherd the majority of all hedge funds’ total asset base, and by observing their first-class picks, Insider Monkey has discovered several investment strategies that have historically outstripped Mr. Market. Insider Monkey’s flagship hedge fund strategy outperformed the S&P 500 index by nearly 5 percentage points annually since its inception in May 2014 through early November 2018. We were able to generate large returns even by identifying short candidates. Our portfolio of short stocks lost 27.5% since February 2017 (through March 12th) even though the market was up nearly 25% during the same period. We just shared a list of 6 short targets in our latest quarterly update and they are already down an average of 6% in less than a month.

How have hedgies been trading istar Inc (NYSE:STAR)?

At Q4’s end, a total of 8 of the hedge funds tracked by Insider Monkey were bullish on this stock, a change of 0% from the second quarter of 2018. Below, you can check out the change in hedge fund sentiment towards STAR over the last 14 quarters. With the smart money’s sentiment swirling, there exists an “upper tier” of notable hedge fund managers who were upping their holdings meaningfully (or already accumulated large positions). 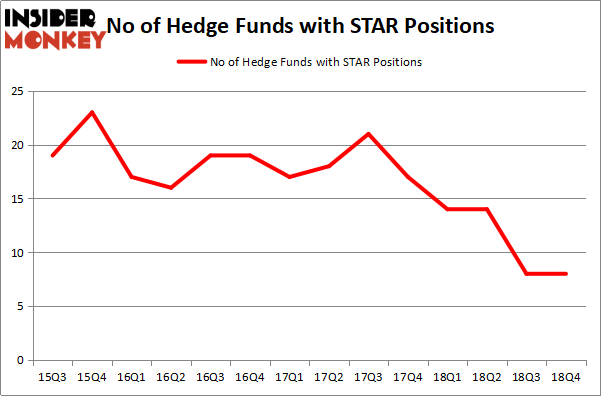 The largest stake in istar Inc (NYSE:STAR) was held by Diamond Hill Capital, which reported holding $58.2 million worth of stock at the end of December. It was followed by Balyasny Asset Management with a $5.2 million position. Other investors bullish on the company included Glendon Capital Management, AQR Capital Management, and Citadel Investment Group.

Seeing as istar Inc (NYSE:STAR) has witnessed falling interest from the entirety of the hedge funds we track, it’s safe to say that there is a sect of money managers who were dropping their positions entirely last quarter. It’s worth mentioning that Jim Simons’s Renaissance Technologies cut the biggest position of the 700 funds monitored by Insider Monkey, comprising close to $1.8 million in stock. D. E. Shaw’s fund, D E Shaw, also dropped its stock, about $0.5 million worth. These moves are intriguing to say the least, as total hedge fund interest stayed the same (this is a bearish signal in our experience).

As you can see these stocks had an average of 6.5 hedge funds with bullish positions and the average amount invested in these stocks was $49 million. That figure was $68 million in STAR’s case. Winmark Corporation (NASDAQ:WINA) is the most popular stock in this table. On the other hand Accelerate Diagnostics Inc (NASDAQ:AXDX) is the least popular one with only 5 bullish hedge fund positions. istar Inc (NYSE:STAR) is not the most popular stock in this group but hedge fund interest is still above average. This is a slightly positive signal but we’d rather spend our time researching stocks that hedge funds are piling on. Our calculations showed that top 15 most popular stocks) among hedge funds returned 24.2% through April 22nd and outperformed the S&P 500 ETF (SPY) by more than 7 percentage points. Unfortunately STAR wasn’t nearly as popular as these 15 stock and hedge funds that were betting on STAR were disappointed as the stock returned -6.6% and underperformed the market. If you are interested in investing in large cap stocks with huge upside potential, you should check out the top 15 most popular stocks) among hedge funds as 13 of these stocks already outperformed the market this year.