Hedge Funds and other institutional investors have just completed filing their 13Fs with the Securities and Exchange Commission, revealing their equity portfolios as of the end of December. At Insider Monkey, we follow nearly 750 active hedge funds and notable investors and by analyzing their 13F filings, we can determine the stocks that they are collectively bullish on. One of their picks is ICICI Bank Limited (NYSE:IBN), so let’s take a closer look at the sentiment that surrounds it in the current quarter.

Is ICICI Bank Limited (NYSE:IBN) a buy right now? Prominent investors are getting more optimistic. The number of bullish hedge fund bets improved by 4 in recent months. Our calculations also showed that IBN isn’t among the 30 most popular stocks among hedge funds.

At the end of the fourth quarter, a total of 26 of the hedge funds tracked by Insider Monkey were bullish on this stock, a change of 18% from the previous quarter. On the other hand, there were a total of 26 hedge funds with a bullish position in IBN a year ago. With the smart money’s positions undergoing their usual ebb and flow, there exists a few notable hedge fund managers who were upping their stakes substantially (or already accumulated large positions). 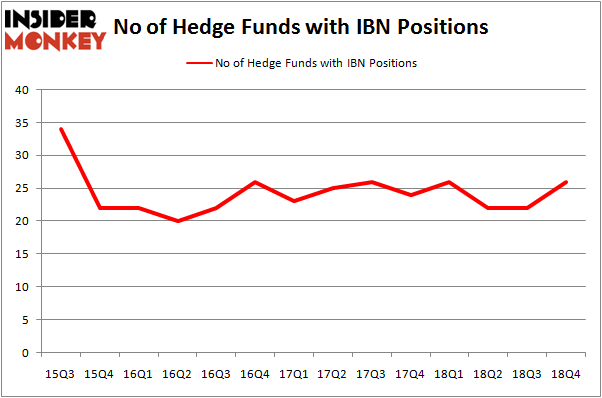 Among these funds, Oaktree Capital Management held the most valuable stake in ICICI Bank Limited (NYSE:IBN), which was worth $96.8 million at the end of the third quarter. On the second spot was LMR Partners which amassed $70.9 million worth of shares. Moreover, Discovery Capital Management, Driehaus Capital, and D E Shaw were also bullish on ICICI Bank Limited (NYSE:IBN), allocating a large percentage of their portfolios to this stock.

As aggregate interest increased, key hedge funds have been driving this bullishness. LMR Partners, managed by Ben Levine, Andrew Manuel and Stefan Renold, established the biggest position in ICICI Bank Limited (NYSE:IBN). LMR Partners had $70.9 million invested in the company at the end of the quarter. Josh Donfeld and David Rogers’s Castle Hook Partners also made a $42.9 million investment in the stock during the quarter. The following funds were also among the new IBN investors: Jonathan Soros’s JS Capital, Jasjit Rekhi’s Sanoor Capital, and Glenn Russell Dubin’s Highbridge Capital Management.

As you can see these stocks had an average of 12.5 hedge funds with bullish positions and the average amount invested in these stocks was $231 million. That figure was $746 million in IBN’s case. Ecopetrol S.A. (NYSE:EC) is the most popular stock in this table. On the other hand China Unicom (Hong Kong) Limited (NYSE:CHU) is the least popular one with only 9 bullish hedge fund positions. Compared to these stocks ICICI Bank Limited (NYSE:IBN) is more popular among hedge funds. Our calculations showed that top 15 most popular stocks among hedge funds returned 19.7% through March 15th and outperformed the S&P 500 ETF (SPY) by 6.6 percentage points. Unfortunately IBN wasn’t in this group. Hedge funds that bet on IBN were disappointed as the stock returned 9.9% and underperformed the market. If you are interested in investing in large cap stocks, you should check out the top 15 hedge fund stocks as 13 of these outperformed the market.