Here is What Hedge Funds Think About Haemonetics Corporation (HAE)

At Insider Monkey, we pore over the filings of nearly 750 top investment firms every quarter, a process we have now completed for the latest reporting period. The data we’ve gathered as a result gives us access to a wealth of collective knowledge based on these firms’ portfolio holdings as of June 28. In this article, we will use that wealth of knowledge to determine whether or not Haemonetics Corporation (NYSE:HAE) makes for a good investment right now.

Haemonetics Corporation (NYSE:HAE) was in 23 hedge funds’ portfolios at the end of June. HAE has experienced a decrease in hedge fund interest recently. There were 24 hedge funds in our database with HAE positions at the end of the previous quarter. Our calculations also showed that HAE isn’t among the 30 most popular stocks among hedge funds (view the video below).

To most shareholders, hedge funds are assumed to be slow, outdated investment tools of years past. While there are over 8000 funds with their doors open today, Our experts look at the upper echelon of this club, about 750 funds. It is estimated that this group of investors preside over the majority of the hedge fund industry’s total capital, and by shadowing their best investments, Insider Monkey has unearthed a few investment strategies that have historically outpaced Mr. Market. Insider Monkey’s flagship hedge fund strategy defeated the S&P 500 index by around 5 percentage points per year since its inception in May 2014. We were able to generate large returns even by identifying short candidates. Our portfolio of short stocks lost 25.7% since February 2017 (through September 30th) even though the market was up more than 33% during the same period. We just shared a list of 10 short targets in our latest quarterly update . 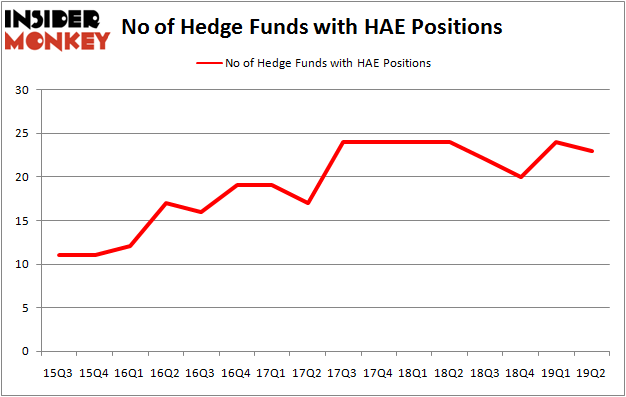 Unlike some fund managers who are betting on Dow reaching 40000 in a year, our long-short investment strategy doesn’t rely on bull markets to deliver double digit returns. We only rely on hedge fund buy/sell signals. Let’s take a glance at the new hedge fund action regarding Haemonetics Corporation (NYSE:HAE).

The largest stake in Haemonetics Corporation (NYSE:HAE) was held by Renaissance Technologies, which reported holding $299 million worth of stock at the end of March. It was followed by Eminence Capital with a $105.9 million position. Other investors bullish on the company included AQR Capital Management, Nitorum Capital, and Healthcor Management LP.

Judging by the fact that Haemonetics Corporation (NYSE:HAE) has witnessed a decline in interest from the aggregate hedge fund industry, it’s safe to say that there lies a certain “tier” of hedge funds that slashed their full holdings heading into Q3. It’s worth mentioning that Andrew Feldstein and Stephen Siderow’s Blue Mountain Capital dropped the largest investment of the “upper crust” of funds watched by Insider Monkey, worth an estimated $10.7 million in stock, and Paul Tudor Jones’s Tudor Investment Corp was right behind this move, as the fund said goodbye to about $2.4 million worth. These transactions are intriguing to say the least, as aggregate hedge fund interest was cut by 1 funds heading into Q3.

As you can see these stocks had an average of 26 hedge funds with bullish positions and the average amount invested in these stocks was $556 million. That figure was $762 million in HAE’s case. First American Financial Corp (NYSE:FAF) is the most popular stock in this table. On the other hand NovoCure Limited (NASDAQ:NVCR) is the least popular one with only 22 bullish hedge fund positions. Haemonetics Corporation (NYSE:HAE) is not the least popular stock in this group but hedge fund interest is still below average. Our calculations showed that top 20 most popular stocks among hedge funds returned 24.4% in 2019 through September 30th and outperformed the S&P 500 ETF (SPY) by 4 percentage points. A small number of hedge funds were also right about betting on HAE, though not to the same extent, as the stock returned 4.8% during the third quarter and outperformed the market.