Gates Industrial Corporation plc (NYSE:GTES) was in 8 hedge funds’ portfolios at the end of December. GTES investors should be aware of a decrease in hedge fund sentiment lately. There were 9 hedge funds in our database with GTES positions at the end of the previous quarter. Our calculations also showed that GTES isn’t among the 30 most popular stocks among hedge funds.

How have hedgies been trading Gates Industrial Corporation plc (NYSE:GTES)?

At Q4’s end, a total of 8 of the hedge funds tracked by Insider Monkey held long positions in this stock, a change of -11% from the second quarter of 2018. On the other hand, there were a total of 14 hedge funds with a bullish position in GTES a year ago. With the smart money’s sentiment swirling, there exists an “upper tier” of noteworthy hedge fund managers who were upping their holdings considerably (or already accumulated large positions). 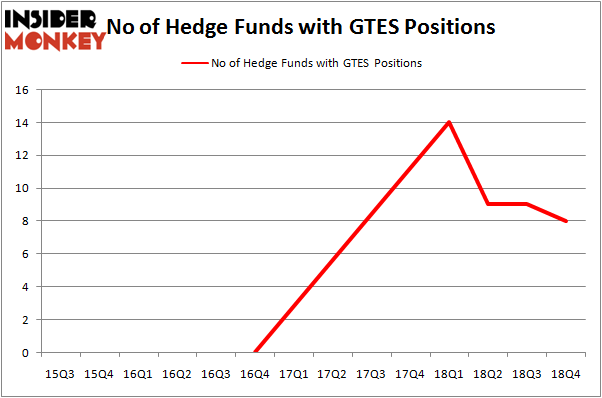 Of the funds tracked by Insider Monkey, Millennium Management, managed by Israel Englander, holds the most valuable position in Gates Industrial Corporation plc (NYSE:GTES). Millennium Management has a $3.4 million position in the stock, comprising less than 0.1%% of its 13F portfolio. The second most bullish fund manager is Driehaus Capital, managed by Richard Driehaus, which holds a $2 million position; 0.1% of its 13F portfolio is allocated to the stock. Some other professional money managers that are bullish comprise Paul Marshall and Ian Wace’s Marshall Wace LLP, Noam Gottesman’s GLG Partners and Minhua Zhang’s Weld Capital Management.

Due to the fact that Gates Industrial Corporation plc (NYSE:GTES) has faced bearish sentiment from hedge fund managers, it’s safe to say that there lies a certain “tier” of money managers that elected to cut their positions entirely in the third quarter. Interestingly, Alexander Mitchell’s Scopus Asset Management dropped the largest investment of the “upper crust” of funds followed by Insider Monkey, valued at close to $6.1 million in stock, and David Costen Haley’s HBK Investments was right behind this move, as the fund cut about $4.1 million worth. These bearish behaviors are intriguing to say the least, as total hedge fund interest fell by 1 funds in the third quarter.

Let’s go over hedge fund activity in other stocks – not necessarily in the same industry as Gates Industrial Corporation plc (NYSE:GTES) but similarly valued. We will take a look at SINA Corp (NASDAQ:SINA), Nuance Communications Inc. (NASDAQ:NUAN), YY Inc (NASDAQ:YY), and DCP Midstream LP (NYSE:DCP). All of these stocks’ market caps are similar to GTES’s market cap.

As you can see these stocks had an average of 21.25 hedge funds with bullish positions and the average amount invested in these stocks was $224 million. That figure was $9 million in GTES’s case. Nuance Communications Inc. (NASDAQ:NUAN) is the most popular stock in this table. On the other hand DCP Midstream LP (NYSE:DCP) is the least popular one with only 5 bullish hedge fund positions. Gates Industrial Corporation plc (NYSE:GTES) is not the least popular stock in this group but hedge fund interest is still below average. Our calculations showed that top 15 most popular stocks) among hedge funds returned 24.2% through April 22nd and outperformed the S&P 500 ETF (SPY) by more than 7 percentage points. A small number of hedge funds were also right about betting on GTES, though not to the same extent, as the stock returned 20.4% and outperformed the market as well.