Here is What Hedge Funds Think About GameStop Corp. (GME)

Is GameStop Corp. (NYSE:GME) a good place to invest some of your money right now? We can gain invaluable insight to help us answer that question by studying the investment trends of top investors, who employ world-class Ivy League graduates, who are given immense resources and industry contacts to put their financial expertise to work. The top picks of these firms have historically outperformed the market when we account for known risk factors, making them very valuable investment ideas.

Hedge fund interest in GameStop Corp. (NYSE:GME) shares was flat at the end of last quarter. This is usually a negative indicator. At the end of this article we will also compare GME to other stocks including Tredegar Corporation (NYSE:TG), Vishay Precision Group Inc (NYSE:VPG), and New Gold Inc. (NYSE:NGD) to get a better sense of its popularity. Our calculations also showed that GME isn’t among the 30 most popular stocks among hedge funds (see the video below). 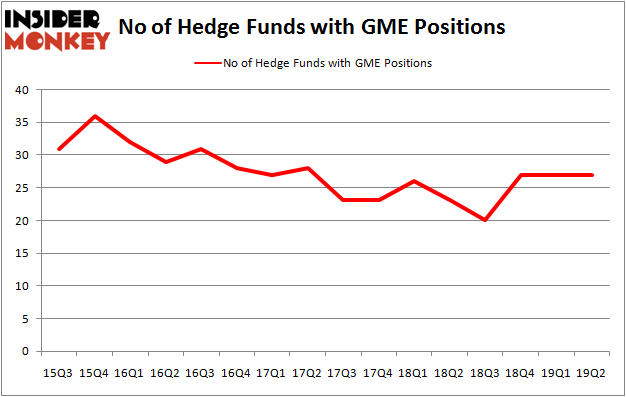 At Q2’s end, a total of 27 of the hedge funds tracked by Insider Monkey were bullish on this stock, a change of 0% from one quarter earlier. On the other hand, there were a total of 23 hedge funds with a bullish position in GME a year ago. With hedgies’ sentiment swirling, there exists a select group of notable hedge fund managers who were adding to their stakes substantially (or already accumulated large positions).

The largest stake in GameStop Corp. (NYSE:GME) was held by Renaissance Technologies, which reported holding $28 million worth of stock at the end of March. It was followed by Aristeia Capital with a $16.1 million position. Other investors bullish on the company included 3G Capital, Alpine Associates, and Millennium Management.

Since GameStop Corp. (NYSE:GME) has witnessed declining sentiment from the smart money, it’s safe to say that there lies a certain “tier” of money managers that decided to sell off their entire stakes in the second quarter. Intriguingly, John Tompkins’s Tyvor Capital sold off the biggest stake of the “upper crust” of funds monitored by Insider Monkey, totaling close to $13.8 million in stock. Peter Rathjens, Bruce Clarke and John Campbell’s fund, Arrowstreet Capital, also cut its stock, about $10.2 million worth. These bearish behaviors are intriguing to say the least, as total hedge fund interest stayed the same (this is a bearish signal in our experience).