With the fourth-quarter round of 13F filings behind us it is time to take a look at the stocks in which some of the best money managers in the world preferred to invest or sell heading into the first quarter. One of these stocks was Forward Air Corporation (NASDAQ:FWRD).

Forward Air Corporation (NASDAQ:FWRD) was in 11 hedge funds’ portfolios at the end of the fourth quarter of 2018. FWRD investors should pay attention to a decrease in support from the world’s most elite money managers lately. There were 15 hedge funds in our database with FWRD holdings at the end of the previous quarter. Our calculations also showed that fwrd isn’t among the 30 most popular stocks among hedge funds.

How have hedgies been trading Forward Air Corporation (NASDAQ:FWRD)?

At the end of the fourth quarter, a total of 11 of the hedge funds tracked by Insider Monkey held long positions in this stock, a change of -27% from the previous quarter. On the other hand, there were a total of 19 hedge funds with a bullish position in FWRD a year ago. With hedge funds’ sentiment swirling, there exists an “upper tier” of noteworthy hedge fund managers who were boosting their holdings substantially (or already accumulated large positions). 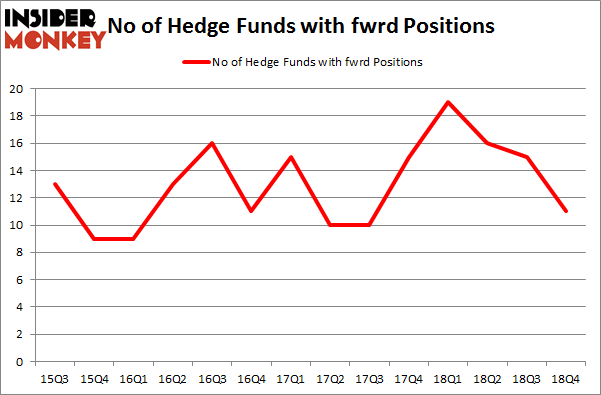 More specifically, Royce & Associates was the largest shareholder of Forward Air Corporation (NASDAQ:FWRD), with a stake worth $51 million reported as of the end of December. Trailing Royce & Associates was GLG Partners, which amassed a stake valued at $11 million. Citadel Investment Group, Algert Coldiron Investors, and Two Sigma Advisors were also very fond of the stock, giving the stock large weights in their portfolios.

Judging by the fact that Forward Air Corporation (NASDAQ:FWRD) has witnessed falling interest from the entirety of the hedge funds we track, logic holds that there is a sect of funds that slashed their full holdings by the end of the third quarter. Interestingly, Brandon Haley’s Holocene Advisors dropped the largest stake of the 700 funds watched by Insider Monkey, totaling an estimated $0.7 million in call options. Matthew Hulsizer’s fund, PEAK6 Capital Management, also dropped its call options, about $0.6 million worth. These transactions are important to note, as aggregate hedge fund interest fell by 4 funds by the end of the third quarter.

As you can see these stocks had an average of 15.5 hedge funds with bullish positions and the average amount invested in these stocks was $131 million. That figure was $70 million in FWRD’s case. Ironwood Pharmaceuticals, Inc. (NASDAQ:IRWD) is the most popular stock in this table. On the other hand Dillard’s, Inc. (NYSE:DDS) is the least popular one with only 14 bullish hedge fund positions. Compared to these stocks Forward Air Corporation (NASDAQ:FWRD) is even less popular than DDS. Our calculations showed that top 15 most popular stocks) among hedge funds returned 24.2% through April 22nd and outperformed the S&P 500 ETF (SPY) by more than 7 percentage points. A small number of hedge funds were also right about betting on FWRD, though not to the same extent, as the stock returned 22.8% and outperformed the market as well.