A whopping number of 13F filings filed with U.S. Securities and Exchange Commission has been processed by Insider Monkey so that individual investors can look at the overall hedge fund sentiment towards the stocks included in their watchlists. These freshly-submitted public filings disclose money managers’ equity positions as of the end of the three-month period that ended June 28, so let’s proceed with the discussion of the hedge fund sentiment on Forty Seven, Inc. (NASDAQ:FTSV).

Forty Seven, Inc. (NASDAQ:FTSV) shareholders have witnessed a decrease in hedge fund sentiment lately. FTSV was in 7 hedge funds’ portfolios at the end of June. There were 8 hedge funds in our database with FTSV holdings at the end of the previous quarter. Our calculations also showed that FTSV isn’t among the 30 most popular stocks among hedge funds (see the video below).

At the moment there are a multitude of gauges market participants have at their disposal to value their stock investments. Two of the less utilized gauges are hedge fund and insider trading activity. We have shown that, historically, those who follow the best picks of the elite hedge fund managers can trounce the broader indices by a superb amount (see the details here).

In addition to following the biggest hedge funds for investment ideas, we also share stock pitches from conferences, investor letters and other sources  like this one where the fund manager is talking about two under the radar 1000% return potential stocks: first one in internet infrastructure and the second in the heart of advertising market. We use hedge fund buy/sell signals to determine whether to conduct in-depth analysis of these stock ideas which take days. We’re going to review the latest hedge fund action encompassing Forty Seven, Inc. (NASDAQ:FTSV). 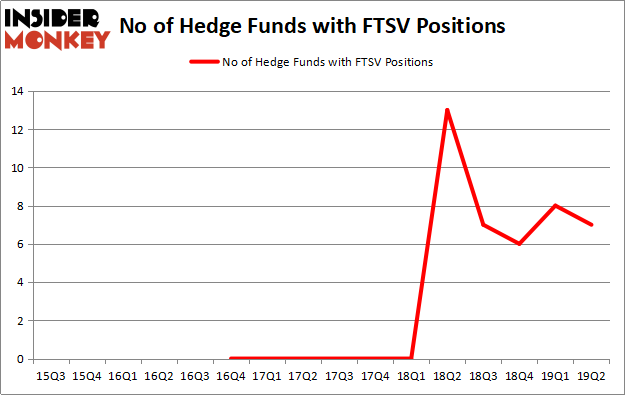 The largest stake in Forty Seven, Inc. (NASDAQ:FTSV) was held by Sectoral Asset Management, which reported holding $7 million worth of stock at the end of March. It was followed by Citadel Investment Group with a $5.4 million position. Other investors bullish on the company included Bourgeon Capital, Baker Bros. Advisors, and Redmile Group.

Since Forty Seven, Inc. (NASDAQ:FTSV) has experienced falling interest from hedge fund managers, it’s safe to say that there lies a certain “tier” of money managers that decided to sell off their entire stakes by the end of the second quarter. At the top of the heap, Brian Ashford-Russell and Tim Woolley’s Polar Capital sold off the biggest investment of the “upper crust” of funds watched by Insider Monkey, totaling close to $2.4 million in stock. Phill Gross and Robert Atchinson’s fund, Adage Capital Management, also dropped its stock, about $0.3 million worth. These transactions are intriguing to say the least, as total hedge fund interest dropped by 1 funds by the end of the second quarter.

As you can see these stocks had an average of 12.25 hedge funds with bullish positions and the average amount invested in these stocks was $44 million. That figure was $21 million in FTSV’s case. Petmed Express Inc (NASDAQ:PETS) is the most popular stock in this table. On the other hand Beazer Homes USA, Inc. (NYSE:BZH) is the least popular one with only 7 bullish hedge fund positions. Compared to these stocks Forty Seven, Inc. (NASDAQ:FTSV) is even less popular than BZH. Hedge funds dodged a bullet by taking a bearish stance towards FTSV. Our calculations showed that the top 20 most popular hedge fund stocks returned 24.4% in 2019 through September 30th and outperformed the S&P 500 ETF (SPY) by 4 percentage points. Unfortunately FTSV wasn’t nearly as popular as these 20 stocks (hedge fund sentiment was very bearish); FTSV investors were disappointed as the stock returned -39.4% during the third quarter and underperformed the market. If you are interested in investing in large cap stocks with huge upside potential, you should check out the top 20 most popular stocks among hedge funds as many of these stocks already outperformed the market so far in 2019.