Is FMC Corporation (NYSE:FMC) worth your attention right now? Investors who are in the know are in a pessimistic mood. The number of bullish hedge fund positions retreated by 5 lately. Our calculations also showed that FMC isn’t among the 30 most popular stocks among hedge funds. FMC was in 32 hedge funds’ portfolios at the end of the fourth quarter of 2018. There were 37 hedge funds in our database with FMC positions at the end of the previous quarter. 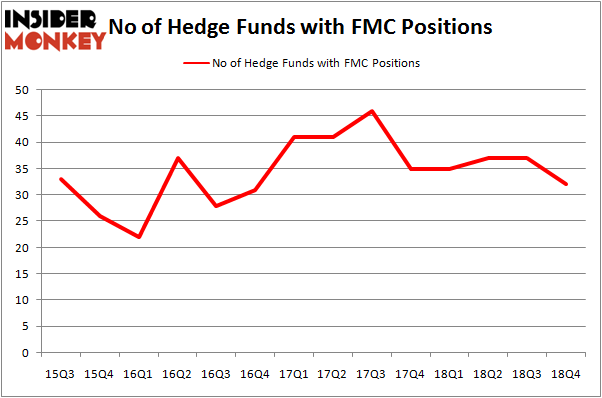 According to Insider Monkey’s hedge fund database, Glenview Capital, managed by Larry Robbins, holds the number one position in FMC Corporation (NYSE:FMC). Glenview Capital has a $659.2 million position in the stock, comprising 6.4% of its 13F portfolio. The second most bullish fund manager is Thunderbird Partners, managed by David Fear, which holds a $215.7 million position; the fund has 25.7% of its 13F portfolio invested in the stock. Some other professional money managers that are bullish encompass James Dinan’s York Capital Management, Israel Englander’s Millennium Management and Amy Minella’s Cardinal Capital.

Since FMC Corporation (NYSE:FMC) has faced a decline in interest from the aggregate hedge fund industry, it’s easy to see that there exists a select few fund managers that elected to cut their entire stakes last quarter. It’s worth mentioning that Aaron Cowen’s Suvretta Capital Management cut the largest stake of all the hedgies tracked by Insider Monkey, totaling about $263.3 million in stock, and Robert Boucai’s Newbrook Capital Advisors was right behind this move, as the fund cut about $41.7 million worth. These bearish behaviors are intriguing to say the least, as aggregate hedge fund interest fell by 5 funds last quarter.

As you can see these stocks had an average of 25 hedge funds with bullish positions and the average amount invested in these stocks was $651 million. That figure was $1377 million in FMC’s case. Akamai Technologies, Inc. (NASDAQ:AKAM) is the most popular stock in this table. On the other hand Regency Centers Corp (NASDAQ:REG) is the least popular one with only 15 bullish hedge fund positions. FMC Corporation (NYSE:FMC) is not the most popular stock in this group but hedge fund interest is still above average. Our calculations showed that top 15 most popular stocks among hedge funds returned 19.7% through March 15th and outperformed the S&P 500 ETF (SPY) by 6.6 percentage points. Hedge funds were also right about betting on FMC as the stock returned 20.4% and outperformed the market as well.