Here is What Hedge Funds Think About Farfetch Limited (FTCH)

The latest 13F reporting period has come and gone, and Insider Monkey is again at the forefront when it comes to making use of this gold mine of data. We have processed the filings of the more than 700 world-class investment firms that we track and now have access to the collective wisdom contained in these filings, which are based on their December 31 holdings, data that is available nowhere else. Should you consider Farfetch Limited (NYSE:FTCH) for your portfolio? We’ll look to this invaluable collective wisdom for the answer.

Farfetch Limited (NYSE:FTCH) has experienced a decrease in hedge fund interest recently. Our calculations also showed that FTCH isn’t among the 30 most popular stocks among hedge funds.

What have hedge funds been doing with Farfetch Limited (NYSE:FTCH)?

At Q4’s end, a total of 18 of the hedge funds tracked by Insider Monkey held long positions in this stock, a change of -36% from the previous quarter. Below, you can check out the change in hedge fund sentiment towards FTCH over the last 14 quarters. So, let’s find out which hedge funds were among the top holders of the stock and which hedge funds were making big moves. 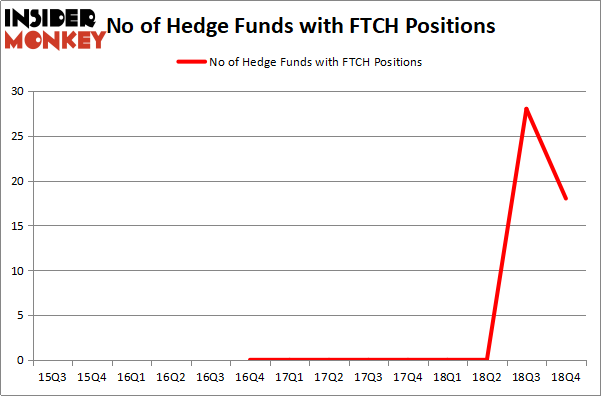 The largest stake in Farfetch Limited (NYSE:FTCH) was held by Light Street Capital, which reported holding $39.8 million worth of stock at the end of September. It was followed by Joho Capital with a $37.7 million position. Other investors bullish on the company included D1 Capital Partners, Alkeon Capital Management, and GLG Partners.

Due to the fact that Farfetch Limited (NYSE:FTCH) has faced a decline in interest from hedge fund managers, logic holds that there is a sect of money managers that decided to sell off their positions entirely in the third quarter. Intriguingly, Alex Sacerdote’s Whale Rock Capital Management dumped the biggest position of all the hedgies monitored by Insider Monkey, valued at about $19.1 million in stock, and Phill Gross and Robert Atchinson’s Adage Capital Management was right behind this move, as the fund cut about $16.3 million worth. These transactions are important to note, as total hedge fund interest was cut by 10 funds in the third quarter.

As you can see these stocks had an average of 21.5 hedge funds with bullish positions and the average amount invested in these stocks was $335 million. That figure was $165 million in FTCH’s case. First American Financial Corp (NYSE:FAF) is the most popular stock in this table. On the other hand The Trade Desk, Inc. (NASDAQ:TTD) is the least popular one with only 16 bullish hedge fund positions. Farfetch Limited (NYSE:FTCH) is not the least popular stock in this group but hedge fund interest is still below average. Our calculations showed that top 15 most popular stocks) among hedge funds returned 24.2% through April 22nd and outperformed the S&P 500 ETF (SPY) by more than 7 percentage points. A small number of hedge funds were also right about betting on FTCH as the stock returned 32.7% and outperformed the market by an even larger margin.