Is Eversource Energy (NYSE:ES) a buy, sell, or hold? The best stock pickers are becoming more confident. The number of long hedge fund positions inched up by 1 recently. Our calculations also showed that ES isn’t among the 30 most popular stocks among hedge funds.

At the end of the fourth quarter, a total of 20 of the hedge funds tracked by Insider Monkey were bullish on this stock, a change of 5% from the previous quarter. On the other hand, there were a total of 13 hedge funds with a bullish position in ES a year ago. With hedgies’ positions undergoing their usual ebb and flow, there exists an “upper tier” of noteworthy hedge fund managers who were boosting their stakes meaningfully (or already accumulated large positions). 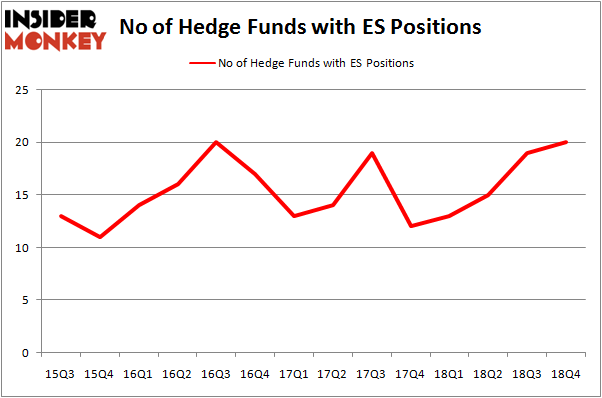 More specifically, Renaissance Technologies was the largest shareholder of Eversource Energy (NYSE:ES), with a stake worth $257.4 million reported as of the end of September. Trailing Renaissance Technologies was Citadel Investment Group, which amassed a stake valued at $93 million. Adage Capital Management, AQR Capital Management, and Zimmer Partners were also very fond of the stock, giving the stock large weights in their portfolios.

Consequently, key hedge funds have been driving this bullishness. ExodusPoint Capital, managed by Michael Gelband, created the biggest position in Eversource Energy (NYSE:ES). ExodusPoint Capital had $12.4 million invested in the company at the end of the quarter. Steve Cohen’s Point72 Asset Management also initiated a $6.3 million position during the quarter. The other funds with new positions in the stock are Ben Levine, Andrew Manuel and Stefan Renold’s LMR Partners, Joel Greenblatt’s Gotham Asset Management, and Matthew Hulsizer’s PEAK6 Capital Management.

As you can see these stocks had an average of 38.75 hedge funds with bullish positions and the average amount invested in these stocks was $1427 million. That figure was $658 million in ES’s case. Royal Caribbean Cruises Ltd. (NYSE:RCL) is the most popular stock in this table. On the other hand PPL Corporation (NYSE:PPL) is the least popular one with only 23 bullish hedge fund positions. Compared to these stocks Eversource Energy (NYSE:ES) is even less popular than PPL. Our calculations showed that top 15 most popular stocks among hedge funds returned 19.7% through March 15th and outperformed the S&P 500 ETF (SPY) by 6.6 percentage points. As you may have guessed ES wasn’t in this group. Hedge funds that bet on ES were disappointed as the stock returned 11.1% and underperformed the market. If you are interested in investing in large cap stocks, you should check out the top 15 hedge fund stocks as 13 of these outperformed the market.