Here is What Hedge Funds Think About Equifax Inc. (EFX)

Insider Monkey has processed numerous 13F filings of hedge funds and successful value investors to create an extensive database of hedge fund holdings. The 13F filings show the hedge funds’ and successful investors’ positions as of the end of the second quarter. You can find articles about an individual hedge fund’s trades on numerous financial news websites. However, in this article we will take a look at their collective moves over the last 5 years and analyze what the smart money thinks of Equifax Inc. (NYSE:EFX) based on that data and determine whether they were really smart about the stock.

Is Equifax Inc. (NYSE:EFX) the right pick for your portfolio? The best stock pickers were becoming less hopeful. The number of bullish hedge fund bets were trimmed by 4 recently. Equifax Inc. (NYSE:EFX) was in 28 hedge funds’ portfolios at the end of the second quarter of 2020. The all time high for this statistics is 38. Our calculations also showed that EFX isn’t among the 30 most popular stocks among hedge funds (click for Q2 rankings and see the video for a quick look at the top 5 stocks). There were 32 hedge funds in our database with EFX positions at the end of the first quarter.

At Insider Monkey we scour multiple sources to uncover the next great investment idea. For example, legal marijuana is one of the fastest growing industries right now, so we are checking out stock pitches like “the Starbucks of cannabis” to identify the next tenbagger. We go through lists like the 10 most profitable companies in the world to pick the best large-cap stocks to buy. Even though we recommend positions in only a tiny fraction of the companies we analyze, we check out as many stocks as we can. We read hedge fund investor letters and listen to stock pitches at hedge fund conferences. You can subscribe to our free daily newsletter on our website to get excerpts of these letters in your inbox. With all of this in mind we’re going to take a glance at the latest hedge fund action encompassing Equifax Inc. (NYSE:EFX).

What does smart money think about Equifax Inc. (NYSE:EFX)?

At Q2’s end, a total of 28 of the hedge funds tracked by Insider Monkey held long positions in this stock, a change of -13% from the previous quarter. The graph below displays the number of hedge funds with bullish position in EFX over the last 20 quarters. With hedge funds’ capital changing hands, there exists a select group of notable hedge fund managers who were adding to their stakes meaningfully (or already accumulated large positions). 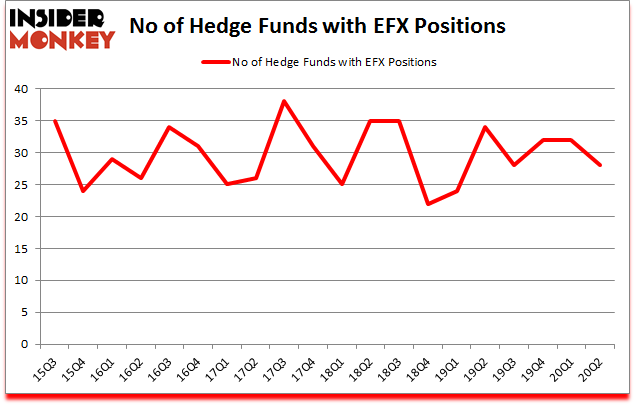 The largest stake in Equifax Inc. (NYSE:EFX) was held by Cantillon Capital Management, which reported holding $397.6 million worth of stock at the end of September. It was followed by Generation Investment Management with a $325.9 million position. Other investors bullish on the company included Echo Street Capital Management, Senator Investment Group, and Harbor Spring Capital. In terms of the portfolio weights assigned to each position Harbor Spring Capital allocated the biggest weight to Equifax Inc. (NYSE:EFX), around 4.95% of its 13F portfolio. Cantillon Capital Management is also relatively very bullish on the stock, setting aside 3.45 percent of its 13F equity portfolio to EFX.

Due to the fact that Equifax Inc. (NYSE:EFX) has faced a decline in interest from the entirety of the hedge funds we track, logic holds that there were a few money managers that elected to cut their positions entirely heading into Q3. Intriguingly,  Lone Pine Capital dropped the biggest position of the “upper crust” of funds monitored by Insider Monkey, totaling close to $378.8 million in stock. Gabriel Plotkin’s fund, Melvin Capital Management, also dropped its stock, about $95.6 million worth. These moves are important to note, as aggregate hedge fund interest fell by 4 funds heading into Q3.

As you can see these stocks had an average of 32.7 hedge funds with bullish positions and the average amount invested in these stocks was $737 million. That figure was $1187 million in EFX’s case. AMETEK, Inc. (NYSE:AME) is the most popular stock in this table. On the other hand Fiat Chrysler Automobiles NV (NYSE:FCAU) is the least popular one with only 20 bullish hedge fund positions. Equifax Inc. (NYSE:EFX) is not the least popular stock in this group but hedge fund interest is still below average. Our overall hedge fund sentiment score for EFX is 43.1. Stocks with higher number of hedge fund positions relative to other stocks as well as relative to their historical range receive a higher sentiment score. This is a slightly negative signal and we’d rather spend our time researching stocks that hedge funds are piling on. Our calculations showed that top 10 most popular stocks among hedge funds returned 41.4% in 2019 and outperformed the S&P 500 ETF (SPY) by 10.1 percentage points. These stocks gained 21.3% in 2020 through September 25th and surpassed the market by 17.7 percentage points. Unfortunately EFX wasn’t nearly as popular as these 10 stocks (hedge fund sentiment was quite bearish); EFX investors were disappointed as the stock returned -8.8% since Q2 and underperformed the market. If you are interested in investing in large cap stocks with huge upside potential, you should check out the top 10 most popular stocks among hedge funds as most of these stocks already outperformed the market in 2020.

Is EFX A Good Investment Right Now?Is EFX A Good Stock To Buy?NYSE:EFXSentiment Score Between 40 and 50Yahoo Finance

Related Insider Monkey Articles
Is GlaxoSmithKline plc (GSK) A Good Stock To Buy?25 Countries with the Most Debt Per Capita and Debt to GDP: 2020 RankingsAlibaba Group Holding (BABA) Has Risen 63% in Last One Year, Outperforms Market...
Top 10 Logistics Companies in the WorldQualcomm (QCOM) Has Risen 49% in Last One Year, Outperforms MarketBrookfield Asset Management (BAM) Has Fallen 10% in Last One Year, Underperforms...
Monthly Newsletter Strategy
Download a free copy of our newsletter and see the details inside!
Hedge Fund Resource Center
Billionaire Hedge Funds