Here is What Hedge Funds Think About Eni SpA (E)?

Insider Monkey has processed numerous 13F filings of hedge funds and famous investors to create an extensive database of hedge fund holdings. The 13F filings show the hedge funds’ and investors’ positions as of the end of the fourth quarter. You can find write-ups about an individual hedge fund’s trades on numerous financial news websites. However, in this article we will take a look at their collective moves and analyze what the smart money thinks of Eni SpA (NYSE:E) based on that data.

Eni SpA (NYSE:E) shares haven’t seen a lot of action during the third quarter. Overall, hedge fund sentiment was unchanged. The stock was in 7 hedge funds’ portfolios at the end of the fourth quarter of 2018. At the end of this article we will also compare E to other stocks including Tesla Inc. (NASDAQ:TSLA), VMware, Inc. (NYSE:VMW), and Charles Schwab Corp (NYSE:SCHW) to get a better sense of its popularity.

We’re going to take a look at the key hedge fund action regarding Eni SpA (NYSE:E).

What have hedge funds been doing with Eni SpA (NYSE:E)?

Heading into the first quarter of 2019, a total of 7 of the hedge funds tracked by Insider Monkey were bullish on this stock, a change of 0% from the second quarter of 2018. Below, you can check out the change in hedge fund sentiment towards E over the last 14 quarters. With hedgies’ sentiment swirling, there exists a few notable hedge fund managers who were increasing their stakes substantially (or already accumulated large positions). 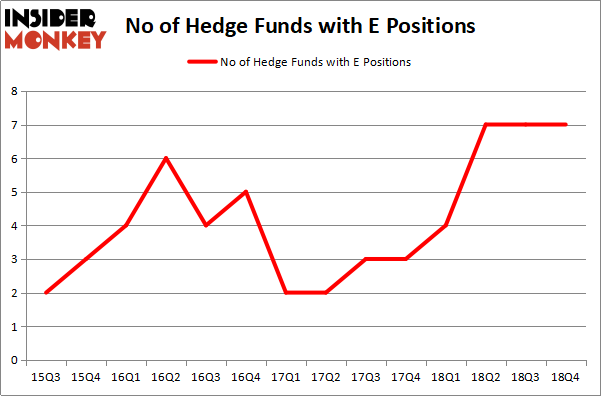 Among these funds, Arrowstreet Capital held the most valuable stake in Eni SpA (NYSE:E), which was worth $38.6 million at the end of the third quarter. On the second spot was Fisher Asset Management which amassed $33.1 million worth of shares. Moreover, Point72 Asset Management, Element Capital Management, and Renaissance Technologies were also bullish on Eni SpA (NYSE:E), allocating a large percentage of their portfolios to this stock.

Judging by the fact that Eni SpA (NYSE:E) has faced a decline in interest from the smart money, we can see that there exists a select few funds who sold off their full holdings in the third quarter. It’s worth mentioning that Vince Maddi and Shawn Brennan’s SIR Capital Management said goodbye to the largest investment of the “upper crust” of funds monitored by Insider Monkey, valued at about $7.8 million in call options, and Matthew Hulsizer’s PEAK6 Capital Management was right behind this move, as the fund said goodbye to about $0.7 million worth. These transactions are interesting, as aggregate hedge fund interest stayed the same (this is a bearish signal in our experience).

As you can see these stocks had an average of 44 hedge funds with bullish positions and the average amount invested in these stocks was $2188 million. That figure was $88 million in E’s case. Baidu, Inc. (NASDAQ:BIDU) is the most popular stock in this table. On the other hand VMware, Inc. (NYSE:VMW) is the least popular one with only 32 bullish hedge fund positions. Compared to these stocks Eni SpA (NYSE:E) is even less popular than VMW. Our calculations showed that top 15 most popular stocks among hedge funds returned 19.7% through March 15th and outperformed the S&P 500 ETF (SPY) by 6.6 percentage points. Unfortunately WFC wasn’t in this group. Hedge funds that bet on Eni were disappointed as the stock returned 12.0% and underperformed the market. If you are interested in investing in large cap stocks, you should check out the top 15 hedge fund stocks as 13 of these outperformed the market.