Many investors, including Paul Tudor Jones or Stan Druckenmiller, have been saying before the Q4 market crash that the stock market is overvalued due to a low interest rate environment that leads to companies swapping their equity for debt and focusing mostly on short-term performance such as beating the quarterly earnings estimates. In the fourth quarter, many investors lost money due to unpredictable events such as the sudden increase in long-term interest rates and unintended consequences of the trade war with China. Nevertheless, many of the stocks that tanked in the fourth quarter still sport strong fundamentals and their decline was more related to the general market sentiment rather than their individual performance and hedge funds kept their bullish stance. In this article we will find out how hedge fund sentiment to Empresa Distribuidora y Comercializadora Norte Sociedad Anónima (NYSE:EDN) changed recently.

Is Empresa Distribuidora y Comercializadora Norte Sociedad Anónima (NYSE:EDN) a healthy stock for your portfolio? The best stock pickers are reducing their bets on the stock. The number of bullish hedge fund bets decreased by 1 in recent months. Our calculations also showed that EDN isn’t among the 30 most popular stocks among hedge funds.

At Q4’s end, a total of 6 of the hedge funds tracked by Insider Monkey were long this stock, a change of -14% from the previous quarter. On the other hand, there were a total of 5 hedge funds with a bullish position in EDN a year ago. With hedge funds’ positions undergoing their usual ebb and flow, there exists a few notable hedge fund managers who were upping their holdings meaningfully (or already accumulated large positions). 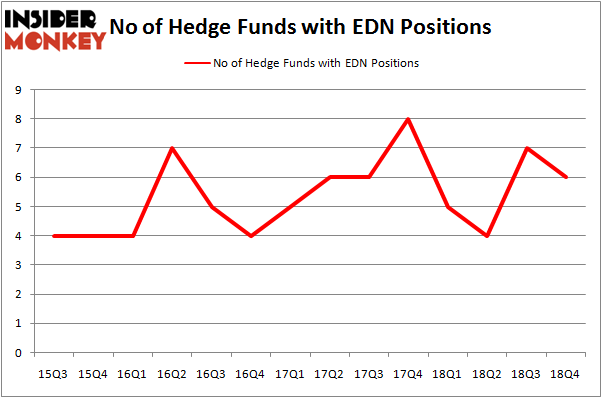 The largest stake in Empresa Distribuidora y Comercializadora Norte Sociedad Anónima (NYSE:EDN) was held by Columbus Hill Capital Management, which reported holding $11.9 million worth of stock at the end of December. It was followed by Point State Capital with a $2.9 million position. Other investors bullish on the company included Millennium Management, LMR Partners, and EMS Capital.

Judging by the fact that Empresa Distribuidora y Comercializadora Norte Sociedad Anónima (NYSE:EDN) has experienced a decline in interest from hedge fund managers, logic holds that there exists a select few fund managers that elected to cut their entire stakes heading into Q3. It’s worth mentioning that Paul Marshall and Ian Wace’s Marshall Wace LLP dropped the biggest investment of all the hedgies followed by Insider Monkey, totaling about $0.5 million in stock. Paul Tudor Jones’s fund, Tudor Investment Corp, also sold off its stock, about $0.3 million worth. These bearish behaviors are important to note, as total hedge fund interest fell by 1 funds heading into Q3.

As you can see these stocks had an average of 16.5 hedge funds with bullish positions and the average amount invested in these stocks was $157 million. That figure was $20 million in EDN’s case. Liberty Tripadvisor Holdings Inc (NASDAQ:LTRPA) is the most popular stock in this table. On the other hand National HealthCare Corporation (NYSE:NHC) is the least popular one with only 9 bullish hedge fund positions. Compared to these stocks Empresa Distribuidora y Comercializadora Norte Sociedad Anónima (NYSE:EDN) is even less popular than NHC. Hedge funds dodged a bullet by taking a bearish stance towards EDN. Our calculations showed that the top 15 most popular hedge fund stocks returned 24.2% through April 22nd and outperformed the S&P 500 ETF (SPY) by more than 7 percentage points. Unfortunately EDN wasn’t nearly as popular as these 15 stock (hedge fund sentiment was very bearish); EDN investors were disappointed as the stock returned -34.5% and underperformed the market. If you are interested in investing in large cap stocks with huge upside potential, you should check out the top 15 most popular stocks) among hedge funds as 13 of these stocks already outperformed the market this year.