Here is What Hedge Funds Think About Eaton Corporation (ETN)

Eaton Corporation plc (NYSE:ETN) was in 30 hedge funds’ portfolios at the end of December. ETN shareholders have witnessed a decrease in support from the world’s most elite money managers lately. There were 38 hedge funds in our database with ETN holdings at the end of the previous quarter. Our calculations also showed that ETN isn’t among the 30 most popular stocks among hedge funds.

At the moment there are tons of tools shareholders have at their disposal to grade publicly traded companies. A duo of the most underrated tools are hedge fund and insider trading moves. We have shown that, historically, those who follow the top picks of the elite investment managers can beat the S&P 500 by a superb amount (see the details here).

How have hedgies been trading Eaton Corporation plc (NYSE:ETN)?

Heading into the first quarter of 2019, a total of 30 of the hedge funds tracked by Insider Monkey were bullish on this stock, a change of -21% from the previous quarter. Below, you can check out the change in hedge fund sentiment towards ETN over the last 14 quarters. With hedgies’ sentiment swirling, there exists a select group of notable hedge fund managers who were boosting their holdings meaningfully (or already accumulated large positions). 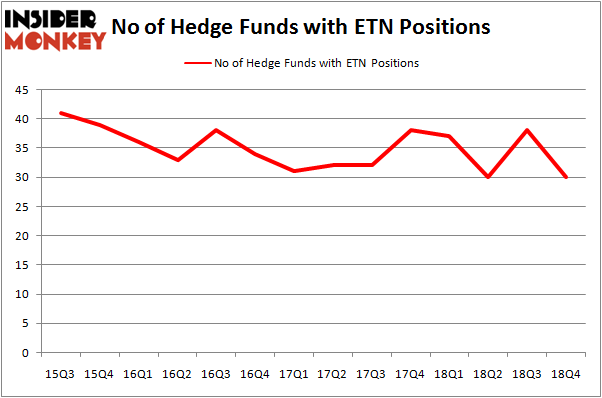 More specifically, Levin Capital Strategies was the largest shareholder of Eaton Corporation plc (NYSE:ETN), with a stake worth $163.7 million reported as of the end of September. Trailing Levin Capital Strategies was AQR Capital Management, which amassed a stake valued at $139 million. Interval Partners, D E Shaw, and Alyeska Investment Group were also very fond of the stock, giving the stock large weights in their portfolios.

Judging by the fact that Eaton Corporation plc (NYSE:ETN) has faced declining sentiment from hedge fund managers, it’s safe to say that there is a sect of money managers who were dropping their positions entirely heading into Q3. Interestingly, Steve Cohen’s Point72 Asset Management dumped the biggest stake of the “upper crust” of funds followed by Insider Monkey, comprising about $49.3 million in stock, and Clint Carlson’s Carlson Capital was right behind this move, as the fund dumped about $41.2 million worth. These bearish behaviors are interesting, as aggregate hedge fund interest fell by 8 funds heading into Q3.

As you can see these stocks had an average of 28 hedge funds with bullish positions and the average amount invested in these stocks was $933 million. That figure was $669 million in ETN’s case. Sempra Energy (NYSE:SRE) is the most popular stock in this table. On the other hand Canadian Natural Resources Limited (NYSE:CNQ) is the least popular one with only 24 bullish hedge fund positions. Eaton Corporation plc (NYSE:ETN) is not the most popular stock in this group but hedge fund interest is still above average. Our calculations showed that top 15 most popular stocks among hedge funds returned 19.7% through March 15th and outperformed the S&P 500 ETF (SPY) by 6.6 percentage points. Hedge funds were also right about betting on ETN, though not to the same extent, as the stock returned 18.4% and outperformed the market as well.