Here is What Hedge Funds Think About Ducommun Incorporated (DCO)

Is Ducommun Incorporated (NYSE:DCO) a good bet right now? We like to analyze hedge fund sentiment before conducting days of in-depth research. We do so because hedge funds and other elite investors have numerous Ivy League graduates, expert network advisers, and supply chain tipsters working or consulting for them. There is not a shortage of news stories covering failed hedge fund investments and it is a fact that hedge funds’ picks don’t beat the market 100% of the time, but their consensus picks have historically done very well and have outperformed the market after adjusting for risk.

Is Ducommun Incorporated (NYSE:DCO) an outstanding investment now? Investors who are in the know are in a bullish mood. The number of long hedge fund positions moved up by 1 in recent months. Our calculations also showed that DCO isn’t among the 30 most popular stocks among hedge funds (click for Q3 rankings and see the video below for Q2 rankings). DCO was in 12 hedge funds’ portfolios at the end of September. There were 11 hedge funds in our database with DCO positions at the end of the previous quarter.

We leave no stone unturned when looking for the next great investment idea. For example Europe is set to become the world’s largest cannabis market, so we check out this European marijuana stock pitch. One of the most bullish analysts in America just put his money where his mouth is. He says, “I’m investing more today than I did back in early 2009.” So we check out his pitch. We read hedge fund investor letters and listen to stock pitches at hedge fund conferences. We also rely on the best performing hedge funds‘ buy/sell signals. We’re going to take a look at the latest hedge fund action encompassing Ducommun Incorporated (NYSE:DCO).

How have hedgies been trading Ducommun Incorporated (NYSE:DCO)?

At Q3’s end, a total of 12 of the hedge funds tracked by Insider Monkey held long positions in this stock, a change of 9% from one quarter earlier. Below, you can check out the change in hedge fund sentiment towards DCO over the last 17 quarters. With hedgies’ sentiment swirling, there exists a select group of noteworthy hedge fund managers who were increasing their stakes significantly (or already accumulated large positions). 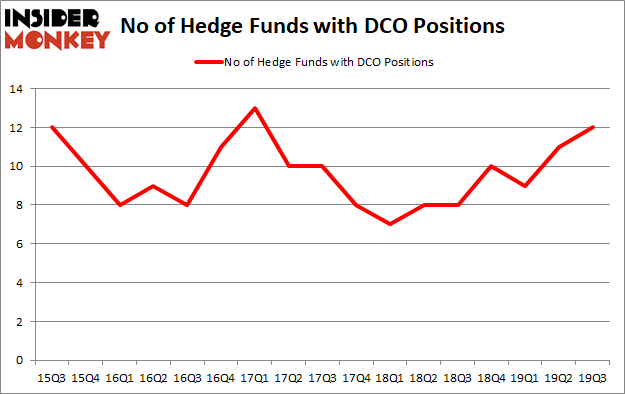 Of the funds tracked by Insider Monkey, Renaissance Technologies has the biggest position in Ducommun Incorporated (NYSE:DCO), worth close to $24.2 million, comprising less than 0.1%% of its total 13F portfolio. Sitting at the No. 2 spot is GAMCO Investors, led by Mario Gabelli, holding a $13.3 million position; 0.1% of its 13F portfolio is allocated to the company. Some other peers with similar optimism contain Cliff Asness’s AQR Capital Management, Israel Englander’s Millennium Management and Chuck Royce’s Royce & Associates. In terms of the portfolio weights assigned to each position Navellier & Associates allocated the biggest weight to Ducommun Incorporated (NYSE:DCO), around 0.24% of its 13F portfolio. Algert Coldiron Investors is also relatively very bullish on the stock, dishing out 0.19 percent of its 13F equity portfolio to DCO.

Consequently, key money managers have jumped into Ducommun Incorporated (NYSE:DCO) headfirst. Marshall Wace, managed by Paul Marshall and Ian Wace, assembled the largest position in Ducommun Incorporated (NYSE:DCO). Marshall Wace had $2 million invested in the company at the end of the quarter. Paul Tudor Jones’s Tudor Investment Corp also made a $0.9 million investment in the stock during the quarter. The only other fund with a new position in the stock is Gavin Saitowitz and Cisco J. del Valle’s Springbok Capital.

Let’s check out hedge fund activity in other stocks – not necessarily in the same industry as Ducommun Incorporated (NYSE:DCO) but similarly valued. We will take a look at Century Bancorp, Inc. (NASDAQ:CNBKA), Digimarc Corp (NASDAQ:DMRC), Digimarc Corp (NASDAQ:DMRC), and Arrow Financial Corporation (NASDAQ:AROW). This group of stocks’ market values are similar to DCO’s market value.

As you can see these stocks had an average of 5.5 hedge funds with bullish positions and the average amount invested in these stocks was $28 million. That figure was $64 million in DCO’s case. Digimarc Corp (NASDAQ:DMRC) is the most popular stock in this table. On the other hand Century Bancorp, Inc. (NASDAQ:CNBKA) is the least popular one with only 5 bullish hedge fund positions. Compared to these stocks Ducommun Incorporated (NYSE:DCO) is more popular among hedge funds. Our calculations showed that top 20 most popular stocks among hedge funds returned 37.4% in 2019 through the end of November and outperformed the S&P 500 ETF (SPY) by 9.9 percentage points. Hedge funds were also right about betting on DCO as the stock returned 15.3% during the first two months of Q4 and outperformed the market by an even larger margin. Hedge funds were clearly right about piling into this stock relative to other stocks with similar market capitalizations.