Douglas Dynamics Inc (NYSE:PLOW) was in 7 hedge funds’ portfolios at the end of the second quarter of 2019. PLOW has experienced a decrease in hedge fund sentiment recently. There were 11 hedge funds in our database with PLOW holdings at the end of the previous quarter. Our calculations also showed that PLOW isn’t among the 30 most popular stocks among hedge funds (see the video below).

What does smart money think about Douglas Dynamics Inc (NYSE:PLOW)? 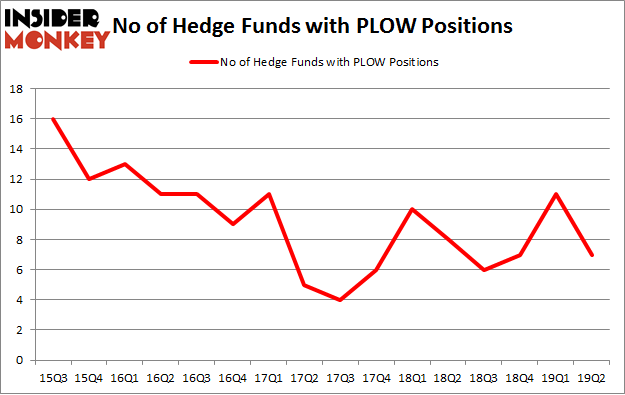 When looking at the institutional investors followed by Insider Monkey, Navellier & Associates, managed by Louis Navellier, holds the largest position in Douglas Dynamics Inc (NYSE:PLOW). Navellier & Associates has a $3.5 million position in the stock, comprising 0.5% of its 13F portfolio. Coming in second is Ken Griffin of Citadel Investment Group, with a $3.1 million position; less than 0.1%% of its 13F portfolio is allocated to the company. Remaining members of the smart money that hold long positions consist of Renaissance Technologies, John Overdeck and David Siegel’s Two Sigma Advisors and Israel Englander’s Millennium Management.

Seeing as Douglas Dynamics Inc (NYSE:PLOW) has experienced declining sentiment from the smart money, we can see that there lies a certain “tier” of hedge funds that decided to sell off their positions entirely last quarter. At the top of the heap, Paul Marshall and Ian Wace’s Marshall Wace LLP said goodbye to the largest investment of all the hedgies followed by Insider Monkey, valued at close to $2.9 million in call options, and Matthew Hulsizer’s PEAK6 Capital Management was right behind this move, as the fund sold off about $2 million worth. These moves are important to note, as aggregate hedge fund interest dropped by 4 funds last quarter.

As you can see these stocks had an average of 7.5 hedge funds with bullish positions and the average amount invested in these stocks was $81 million. That figure was $10 million in PLOW’s case. Qiwi PLC (NASDAQ:QIWI) is the most popular stock in this table. On the other hand CNX Midstream Partners LP (NYSE:CNXM) is the least popular one with only 5 bullish hedge fund positions. Douglas Dynamics Inc (NYSE:PLOW) is not the least popular stock in this group but hedge fund interest is still below average. Our calculations showed that top 20 most popular stocks among hedge funds returned 24.4% in 2019 through September 30th and outperformed the S&P 500 ETF (SPY) by 4 percentage points. A small number of hedge funds were also right about betting on PLOW as the stock returned 12.7% during the same time frame and outperformed the market by an even larger margin.