Here is What Hedge Funds Think About Curtiss-Wright Corp. (CW)

After several tireless days we have finished crunching the numbers from nearly 750 13F filings issued by the elite hedge funds and other investment firms that we track at Insider Monkey, which disclosed those firms’ equity portfolios as of December 31. The results of that effort will be put on display in this article, as we share valuable insight into the smart money sentiment towards Curtiss-Wright Corp. (NYSE:CW).

Curtiss-Wright Corp. (NYSE:CW) was in 20 hedge funds’ portfolios at the end of the fourth quarter of 2018. CW investors should be aware of a decrease in enthusiasm from smart money lately. There were 22 hedge funds in our database with CW positions at the end of the previous quarter. Our calculations also showed that CW isn’t among the 30 most popular stocks among hedge funds.

In the eyes of most shareholders, hedge funds are assumed to be unimportant, outdated investment vehicles of yesteryear. While there are greater than 8000 funds in operation today, Our researchers hone in on the top tier of this club, around 750 funds. Most estimates calculate that this group of people orchestrate bulk of the hedge fund industry’s total asset base, and by following their unrivaled investments, Insider Monkey has revealed numerous investment strategies that have historically defeated the market. Insider Monkey’s flagship hedge fund strategy outperformed the S&P 500 index by nearly 5 percentage points a year since its inception in May 2014 through early November 2018. We were able to generate large returns even by identifying short candidates. Our portfolio of short stocks lost 27.5% since February 2017 (through March 12th) even though the market was up nearly 25% during the same period. We just shared a list of 6 short targets in our latest quarterly update and they are already down an average of 6% in less than a month.

What does the smart money think about Curtiss-Wright Corp. (NYSE:CW)?

Heading into the first quarter of 2019, a total of 20 of the hedge funds tracked by Insider Monkey were long this stock, a change of -9% from the previous quarter. On the other hand, there were a total of 20 hedge funds with a bullish position in CW a year ago. With the smart money’s positions undergoing their usual ebb and flow, there exists a select group of key hedge fund managers who were increasing their holdings considerably (or already accumulated large positions). 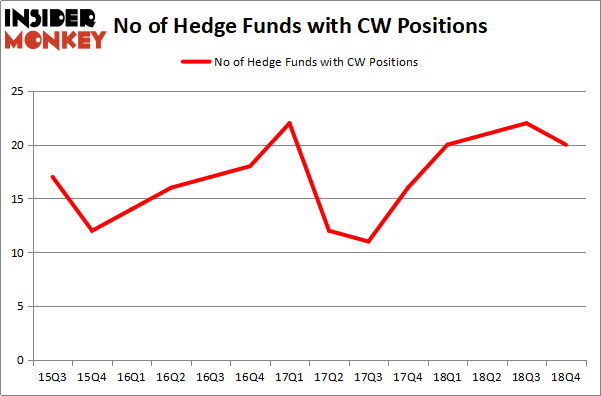 According to Insider Monkey’s hedge fund database, Cliff Asness’s AQR Capital Management has the biggest position in Curtiss-Wright Corp. (NYSE:CW), worth close to $155.2 million, amounting to 0.2% of its total 13F portfolio. On AQR Capital Management’s heels is GAMCO Investors, managed by Mario Gabelli, which holds a $69.8 million position; 0.6% of its 13F portfolio is allocated to the stock. Some other hedge funds and institutional investors that are bullish include Jim Simons’s Renaissance Technologies, Ken Griffin’s Citadel Investment Group and Israel Englander’s Millennium Management.

Seeing as Curtiss-Wright Corp. (NYSE:CW) has experienced declining sentiment from the aggregate hedge fund industry, it’s safe to say that there exists a select few money managers that elected to cut their positions entirely heading into Q3. At the top of the heap, Phill Gross and Robert Atchinson’s Adage Capital Management dumped the biggest stake of all the hedgies tracked by Insider Monkey, totaling about $17.3 million in stock. Andrew Feldstein and Stephen Siderow’s fund, Blue Mountain Capital, also sold off its stock, about $7.6 million worth. These transactions are interesting, as total hedge fund interest dropped by 2 funds heading into Q3.

As you can see these stocks had an average of 16.5 hedge funds with bullish positions and the average amount invested in these stocks was $199 million. That figure was $356 million in CW’s case. LivaNova PLC (NASDAQ:LIVN) is the most popular stock in this table. On the other hand Buckeye Partners, L.P. (NYSE:BPL) is the least popular one with only 5 bullish hedge fund positions. Curtiss-Wright Corp. (NYSE:CW) is not the most popular stock in this group but hedge fund interest is still above average. This is a slightly positive signal but we’d rather spend our time researching stocks that hedge funds are piling on. Our calculations showed that top 15 most popular stocks) among hedge funds returned 24.2% through April 22nd and outperformed the S&P 500 ETF (SPY) by more than 7 percentage points. Unfortunately CW wasn’t nearly as popular as these 15 stock and hedge funds that were betting on CW were disappointed as the stock returned 10% and underperformed the market. If you are interested in investing in large cap stocks with huge upside potential, you should check out the top 15 most popular stocks) among hedge funds as 13 of these stocks already outperformed the market this year.