Here is What Hedge Funds Think About Constellium NV (CSTM)

Although the masses and most of the financial media blame hedge funds for their exorbitant fee structure and disappointing performance, these investors have proved to have great stock picking abilities over the years (that’s why their assets under management continue to swell). We believe hedge fund sentiment should serve as a crucial tool of an individual investor’s stock selection process, as it may offer great insights of how the brightest minds of the finance industry feel about specific stocks. After all, these people have access to smartest analysts and expensive data/information sources that individual investors can’t match. So should one consider investing in Constellium NV (NYSE:CSTM)? The smart money sentiment can provide an answer to this question.

Is Constellium NV (NYSE:CSTM) the right investment to pursue these days? Prominent investors are reducing their bets on the stock. The number of long hedge fund bets went down by 2 lately. Our calculations also showed that CSTM isn’t among the 30 most popular stocks among hedge funds.

Heading into the fourth quarter of 2018, a total of 35 of the hedge funds tracked by Insider Monkey held long positions in this stock, a change of -5% from one quarter earlier. On the other hand, there were a total of 35 hedge funds with a bullish position in CSTM at the beginning of this year. With hedgies’ sentiment swirling, there exists a select group of notable hedge fund managers who were increasing their holdings considerably (or already accumulated large positions). 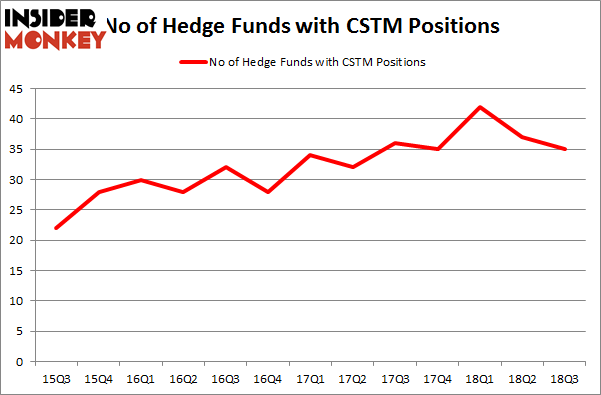 Of the funds tracked by Insider Monkey, Peter S. Park’s Park West Asset Management has the number one position in Constellium NV (NYSE:CSTM), worth close to $40.3 million, corresponding to 1.5% of its total 13F portfolio. Coming in second is James Dinan of York Capital Management, with a $30.6 million position; 1% of its 13F portfolio is allocated to the stock. Remaining members of the smart money that are bullish comprise Mark Kingdon’s Kingdon Capital, David Rosen’s Rubric Capital Management and Larry Foley and Paul Farrell’s Bronson Point Partners.

Seeing as Constellium NV (NYSE:CSTM) has faced declining sentiment from the smart money, it’s safe to say that there is a sect of fund managers who were dropping their positions entirely in the third quarter. Intriguingly, Phill Gross and Robert Atchinson’s Adage Capital Management sold off the largest investment of all the hedgies followed by Insider Monkey, totaling an estimated $8.2 million in stock. Bart Baum’s fund, Ionic Capital Management, also dropped its stock, about $4.9 million worth. These moves are interesting, as total hedge fund interest was cut by 2 funds in the third quarter.

As you can see these stocks had an average of 14 hedge funds with bullish positions and the average amount invested in these stocks was $96 million. That figure was $440 million in CSTM’s case. Enanta Pharmaceuticals Inc (NASDAQ:ENTA) is the most popular stock in this table. On the other hand HFF, Inc. (NYSE:HF) is the least popular one with only 10 bullish hedge fund positions. Compared to these stocks Constellium NV (NYSE:CSTM) is more popular among hedge funds. Considering that hedge funds are fond of this stock in relation to its market cap peers, it may be a good idea to analyze it in detail and potentially include it in your portfolio.

Here is What Hedge Funds Think About Nielsen Holdings plc (NLSN)
Monthly Newsletter Strategy
Download a free copy of our newsletter and see the details inside!
Hedge Fund Resource Center
Related News
Hedge Funds Like These European Companies; Should You? Constellium NV (CSTM): Why Wolf Hill Capital Loves This Aluminum Stock This $800 Million Hedge Fund Will Sell 100% Of These Positions Constellium NV (CSTM): This Metric Is Giving A Huge Buy Signal Priceline, Alphabet, Hanes: Concourse Capital Was Loading Up On These 5 Stocks in Q2 D. E. Shaw Steps Up Interest in Aluminium Production Company Should You Avoid Constellium NV (CSTM)? The 10 Best Islands to Visit in 2019 5 Most Socially Responsible Companies in America 5 Ways You Can Eliminate Credit Card Debt
Billionaire Hedge Funds