Here is What Hedge Funds Think About Cognex Corporation (CGNX)

Hedge Funds and other institutional investors have just completed filing their 13Fs with the Securities and Exchange Commission, revealing their equity portfolios as of the end of December. At Insider Monkey, we follow nearly 750 active hedge funds and notable investors and by analyzing their 13F filings, we can determine the stocks that they are collectively bullish on. One of their picks is Cognex Corporation (NASDAQ:CGNX), so let’s take a closer look at the sentiment that surrounds it in the current quarter.

Cognex Corporation (NASDAQ:CGNX) shares haven’t seen a lot of action during the third quarter. Overall, hedge fund sentiment was unchanged. The stock was in 13 hedge funds’ portfolios at the end of December. At the end of this article we will also compare CGNX to other stocks including Ares Capital Corporation (NASDAQ:ARCC), News Corp (NASDAQ:NWSA), and RingCentral Inc (NYSE:RNG) to get a better sense of its popularity.

To most shareholders, hedge funds are seen as slow, old investment vehicles of the past. While there are over 8000 funds in operation at the moment, We hone in on the upper echelon of this club, around 750 funds. These hedge fund managers orchestrate bulk of the hedge fund industry’s total capital, and by keeping an eye on their highest performing investments, Insider Monkey has identified many investment strategies that have historically beaten the broader indices. Insider Monkey’s flagship hedge fund strategy surpassed the S&P 500 index by nearly 5 percentage points per year since its inception in May 2014 through early November 2018. We were able to generate large returns even by identifying short candidates. Our portfolio of short stocks lost 27.5% since February 2017 (through March 12th) even though the market was up nearly 25% during the same period. We just shared a list of 6 short targets in our latest quarterly update and they are already down an average of 6% in less than a month.

At Q4’s end, a total of 13 of the hedge funds tracked by Insider Monkey were long this stock, a change of 0% from the second quarter of 2018. By comparison, 19 hedge funds held shares or bullish call options in CGNX a year ago. Overall hedge fund sentiment towards CGNX peaked during the second half of 2017. Incidentally CGNX shares peaked at the end of 2017. So hedge funds actually bailed out of the stock at the right time. Unfortunately, they didn’t get back into the stock in time this time. 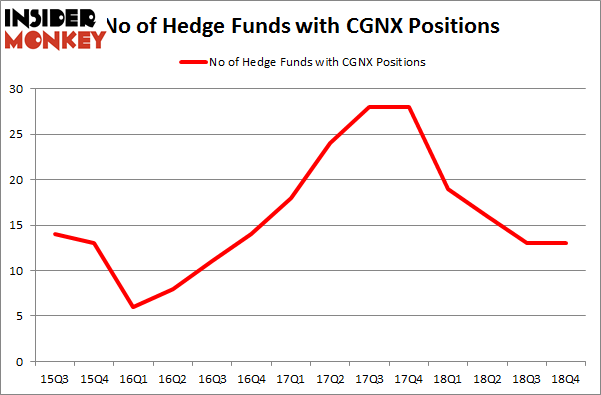 The largest stake in Cognex Corporation (NASDAQ:CGNX) was held by Joho Capital, which reported holding $107.3 million worth of stock at the end of September. It was followed by Royce & Associates with a $43.6 million position. Other investors bullish on the company included Viking Global, Polar Capital, and PDT Partners.

Since Cognex Corporation (NASDAQ:CGNX) has experienced a decline in interest from the smart money, logic holds that there lies a certain “tier” of hedgies who were dropping their full holdings heading into Q3. Intriguingly, Ken Griffin’s Citadel Investment Group dropped the largest position of the “upper crust” of funds followed by Insider Monkey, valued at close to $2.1 million in stock, and Richard Driehaus’s Driehaus Capital was right behind this move, as the fund cut about $1.4 million worth. These transactions are intriguing to say the least, as aggregate hedge fund interest stayed the same (this is a bearish signal in our experience).

As you can see these stocks had an average of 30 hedge funds with bullish positions and the average amount invested in these stocks was $520 million. That figure was $261 million in CGNX’s case. RingCentral Inc (NYSE:RNG) is the most popular stock in this table. On the other hand News Corp (NASDAQ:NWSA) is the least popular one with only 23 bullish hedge fund positions. Compared to these stocks Cognex Corporation (NASDAQ:CGNX) is even less popular than NWSA. Our calculations showed that top 15 most popular stocks among hedge funds returned 21.3% through April 8th and outperformed the S&P 500 ETF (SPY) by more than 5 percentage points. Only a small number of hedge funds were also right about betting on CGNX as the stock returned 38.9% and outperformed the market as well.

Is Liberty Media Corporation (FWONA) A Good Stock To Buy?
Monthly Newsletter Strategy
Download a free copy of our newsletter and see the details inside!
Hedge Fund Resource Center
Related News
Should You Avoid Cognex Corporation (CGNX)? Rise of the Machines: Why It’s Time to Invest in Robots Chuck Royce Is Overweight Industrials; Here’s Why Should You Buy Cognex Corporation (CGNX)? Tiger Cub Robert Karr’s Top Tech Bets Paid Off Big in Q3 Why These Five Stocks Are on the Move Today? Tiger Cub Robert Karr Is Bullish On Cognex Corporation (CGNX) for 2016; Plus Four Other Major Moves 20 Clever Bumble Bios for Guys 15 Most Physically Demanding Olympic Sports Hedge Funds Have Never Been This Bullish On Visa Inc (V)
Billionaire Hedge Funds