Hedge fund interest in Coca-Cola FEMSA, S.A.B. de C.V. (NYSE:KOF) shares was flat at the end of last quarter. This is usually a negative indicator. At the end of this article we will also compare KOF to other stocks including Akamai Technologies, Inc. (NASDAQ:AKAM), Annaly Capital Management, Inc. (NYSE:NLY), and Hasbro, Inc. (NASDAQ:HAS) to get a better sense of its popularity. Our calculations also showed that KOF isn’t among the 30 most popular stocks among hedge funds (view the video below).

At the moment there are plenty of methods stock traders have at their disposal to assess stocks. A couple of the less utilized methods are hedge fund and insider trading sentiment. Our researchers have shown that, historically, those who follow the top picks of the top hedge fund managers can outperform the S&P 500 by a healthy amount (see the details here). 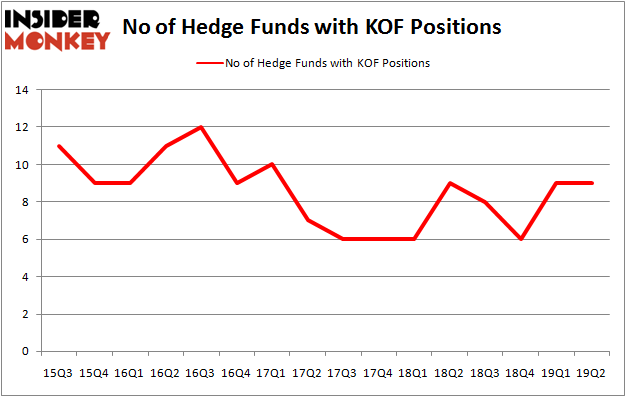 Unlike some fund managers who are betting on Dow reaching 40000 in a year, our long-short investment strategy doesn’t rely on bull markets to deliver double digit returns. We only rely on hedge fund buy/sell signals. We’re going to take a gander at the fresh hedge fund action encompassing Coca-Cola FEMSA, S.A.B. de C.V. (NYSE:KOF).

More specifically, Bill & Melinda Gates Foundation Trust was the largest shareholder of Coca-Cola FEMSA, S.A.B. de C.V. (NYSE:KOF), with a stake worth $386.2 million reported as of the end of March. Trailing Bill & Melinda Gates Foundation Trust was Renaissance Technologies, which amassed a stake valued at $86.3 million. Millennium Management, AQR Capital Management, and Arrowstreet Capital were also very fond of the stock, giving the stock large weights in their portfolios.

Judging by the fact that Coca-Cola FEMSA, S.A.B. de C.V. (NYSE:KOF) has faced bearish sentiment from the aggregate hedge fund industry, it’s easy to see that there is a sect of fund managers that decided to sell off their entire stakes by the end of the second quarter. Interestingly, Ken Griffin’s Citadel Investment Group dropped the biggest investment of the “upper crust” of funds watched by Insider Monkey, valued at an estimated $0.5 million in call options. Matthew Hulsizer’s fund, PEAK6 Capital Management, also cut its call options, about $0.4 million worth. These transactions are intriguing to say the least, as aggregate hedge fund interest stayed the same (this is a bearish signal in our experience).

As you can see these stocks had an average of 29 hedge funds with bullish positions and the average amount invested in these stocks was $518 million. That figure was $495 million in KOF’s case. Chewy, Inc. (NYSE:CHWY) is the most popular stock in this table. On the other hand Annaly Capital Management, Inc. (NYSE:NLY) is the least popular one with only 21 bullish hedge fund positions. Compared to these stocks Coca-Cola FEMSA, S.A.B. de C.V. (NYSE:KOF) is even less popular than NLY. Hedge funds dodged a bullet by taking a bearish stance towards KOF. Our calculations showed that the top 20 most popular hedge fund stocks returned 24.4% in 2019 through September 30th and outperformed the S&P 500 ETF (SPY) by 4 percentage points. Unfortunately KOF wasn’t nearly as popular as these 20 stocks (hedge fund sentiment was very bearish); KOF investors were disappointed as the stock returned -2.4% during the third quarter and underperformed the market. If you are interested in investing in large cap stocks with huge upside potential, you should check out the top 20 most popular stocks among hedge funds as many of these stocks already outperformed the market so far in 2019.