How do you pick the next stock to invest in? One way would be to spend days of research browsing through thousands of publicly traded companies. However, an easier way is to look at the stocks that smart money investors are collectively bullish on. Hedge funds and other institutional investors usually invest large amounts of capital and have to conduct due diligence while choosing their next pick. They don’t always get it right, but, on average, their stock picks historically generated strong returns after adjusting for known risk factors. With this in mind, let’s take a look at the recent hedge fund activity surrounding CNO Financial Group Inc (NYSE:CNO).

CNO Financial Group Inc (NYSE:CNO) investors should be aware of an increase in enthusiasm from smart money in recent months. CNO was in 14 hedge funds’ portfolios at the end of the second quarter of 2019. There were 13 hedge funds in our database with CNO positions at the end of the previous quarter. Our calculations also showed that CNO isn’t among the 30 most popular stocks among hedge funds (view the video below).

What have hedge funds been doing with CNO Financial Group Inc (NYSE:CNO)? 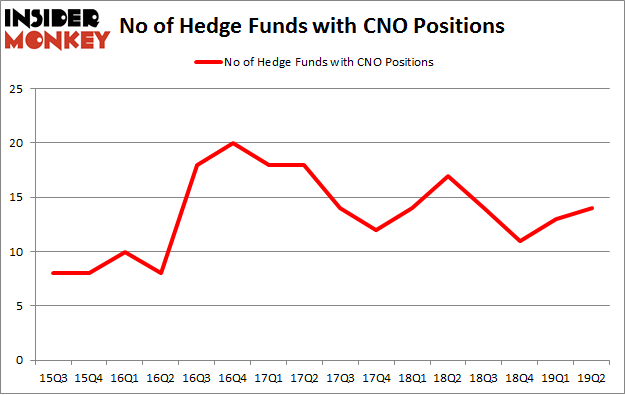 When looking at the institutional investors followed by Insider Monkey, Richard S. Pzena’s Pzena Investment Management has the biggest position in CNO Financial Group Inc (NYSE:CNO), worth close to $64.3 million, comprising 0.3% of its total 13F portfolio. Sitting at the No. 2 spot is Citadel Investment Group, led by Ken Griffin, holding a $47.6 million position; the fund has less than 0.1%% of its 13F portfolio invested in the stock. Remaining members of the smart money that hold long positions comprise Israel Englander’s Millennium Management, Joe Huber’s Huber Capital Management and Cliff Asness’s AQR Capital Management.

As aggregate interest increased, specific money managers have been driving this bullishness. Interval Partners, managed by Gregg Moskowitz, created the biggest position in CNO Financial Group Inc (NYSE:CNO). Interval Partners had $1.8 million invested in the company at the end of the quarter. Matthew Tewksbury’s Stevens Capital Management also made a $0.4 million investment in the stock during the quarter. The following funds were also among the new CNO investors: Minhua Zhang’s Weld Capital Management and Bruce Kovner’s Caxton Associates LP.

As you can see these stocks had an average of 24.25 hedge funds with bullish positions and the average amount invested in these stocks was $387 million. That figure was $212 million in CNO’s case. International Game Technology PLC (NYSE:IGT) is the most popular stock in this table. On the other hand El Paso Electric Company (NYSE:EE) is the least popular one with only 16 bullish hedge fund positions. Compared to these stocks CNO Financial Group Inc (NYSE:CNO) is even less popular than EE. Hedge funds dodged a bullet by taking a bearish stance towards CNO. Our calculations showed that the top 20 most popular hedge fund stocks returned 24.4% in 2019 through September 30th and outperformed the S&P 500 ETF (SPY) by 4 percentage points. Unfortunately CNO wasn’t nearly as popular as these 20 stocks (hedge fund sentiment was very bearish); CNO investors were disappointed as the stock returned -4.4% during the third quarter and underperformed the market. If you are interested in investing in large cap stocks with huge upside potential, you should check out the top 20 most popular stocks among hedge funds as many of these stocks already outperformed the market so far in 2019.