Legendary investors such as Jeffrey Talpins and Seth Klarman earn enormous amounts of money for themselves and their investors by doing in-depth research on small-cap stocks that big brokerage houses don’t publish. Small cap stocks -especially when they are screened well- can generate substantial outperformance versus a boring index fund. That’s why we analyze the activity of those elite funds in these small-cap stocks. In the following paragraphs, we analyze Casella Waste Systems Inc. (NASDAQ:CWST) from the perspective of those elite funds.

Is Casella Waste Systems Inc. (NASDAQ:CWST) an outstanding stock to buy now? The smart money is becoming hopeful. The number of bullish hedge fund positions rose by 2 in recent months. Our calculations also showed that CWST isn’t among the 30 most popular stocks among hedge funds.

What does the smart money think about Casella Waste Systems Inc. (NASDAQ:CWST)? 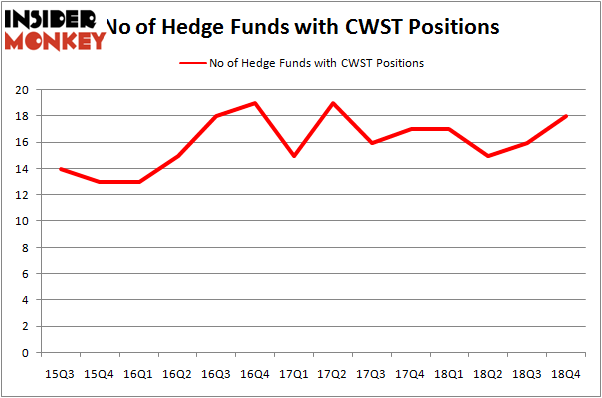 According to Insider Monkey’s hedge fund database, Jim Simons’s Renaissance Technologies has the largest position in Casella Waste Systems Inc. (NASDAQ:CWST), worth close to $91.3 million, comprising 0.1% of its total 13F portfolio. Coming in second is Two Sigma Advisors, led by John Overdeck and David Siegel, holding a $8.3 million position; less than 0.1%% of its 13F portfolio is allocated to the company. Other hedge funds and institutional investors that are bullish include George McCabe’s Portolan Capital Management, Richard Driehaus’s Driehaus Capital and Ian Simm’s Impax Asset Management.

Consequently, specific money managers were breaking ground themselves. Driehaus Capital, managed by Richard Driehaus, created the largest position in Casella Waste Systems Inc. (NASDAQ:CWST). Driehaus Capital had $6.7 million invested in the company at the end of the quarter. Brandon Haley’s Holocene Advisors also made a $0.4 million investment in the stock during the quarter. The other funds with brand new CWST positions are Ken Griffin’s Citadel Investment Group and Paul Tudor Jones’s Tudor Investment Corp.

As you can see these stocks had an average of 13.75 hedge funds with bullish positions and the average amount invested in these stocks was $107 million. That figure was $150 million in CWST’s case. Sunrun Inc (NASDAQ:RUN) is the most popular stock in this table. On the other hand MaxLinear, Inc. (NYSE:MXL) is the least popular one with only 5 bullish hedge fund positions. Casella Waste Systems Inc. (NASDAQ:CWST) is not the most popular stock in this group but hedge fund interest is still above average. Our calculations showed that top 15 most popular stocks) among hedge funds returned 24.2% through April 22nd and outperformed the S&P 500 ETF (SPY) by more than 7 percentage points. Hedge funds were also right about betting on CWST as the stock returned 24.7% and outperformed the market by an even larger margin. Hedge funds were rewarded for their relative bullishness.