A market correction in the fourth quarter, spurred by a number of global macroeconomic concerns and rising interest rates ended up having a negative impact on the markets and many hedge funds as a result. The stocks of smaller companies were especially hard hit during this time as investors fled to investments seen as being safer. This is evident in the fact that the Russell 2000 ETF underperformed the S&P 500 ETF by nearly 7 percentage points during the fourth quarter. We also received indications that hedge funds were trimming their positions amid the market volatility and uncertainty, and given their greater inclination towards smaller cap stocks than other investors, it follows that a stronger sell-off occurred in those stocks. Let’s study the hedge fund sentiment to see how those concerns affected their ownership of Camden Property Trust (NYSE:CPT) during the quarter.

Camden Property Trust (NYSE:CPT) was in 19 hedge funds’ portfolios at the end of the fourth quarter of 2018. CPT investors should pay attention to an increase in enthusiasm from smart money in recent months. There were 14 hedge funds in our database with CPT positions at the end of the previous quarter. Our calculations also showed that CPT isn’t among the 30 most popular stocks among hedge funds. 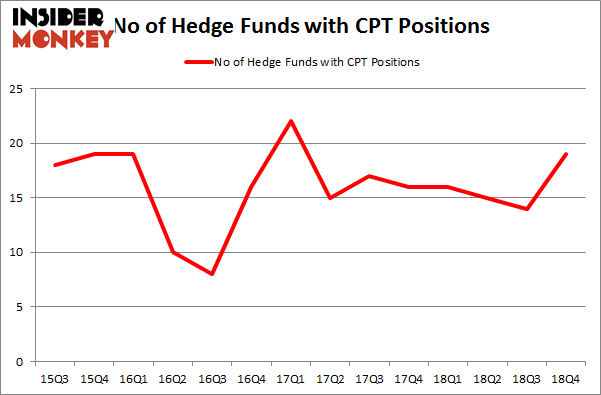 Consequently, key money managers were breaking ground themselves. Balyasny Asset Management, managed by Dmitry Balyasny, assembled the biggest position in Camden Property Trust (NYSE:CPT). Balyasny Asset Management had $25.1 million invested in the company at the end of the quarter. Eduardo Abush’s Waterfront Capital Partners also made a $7.7 million investment in the stock during the quarter. The other funds with new positions in the stock are Paul Tudor Jones’s Tudor Investment Corp, George Zweig, Shane Haas and Ravi Chander’s Signition LP, and Mike Vranos’s Ellington.

As you can see these stocks had an average of 29.5 hedge funds with bullish positions and the average amount invested in these stocks was $782 million. That figure was $301 million in CPT’s case. Alliance Data Systems Corporation (NYSE:ADS) is the most popular stock in this table. On the other hand Amdocs Limited (NASDAQ:DOX) is the least popular one with only 24 bullish hedge fund positions. Compared to these stocks Camden Property Trust (NYSE:CPT) is even less popular than DOX. Considering that hedge funds aren’t fond of this stock in relation to other companies analyzed in this article, it may be a good idea to analyze it in detail and understand why the smart money isn’t behind this stock. This isn’t necessarily bad news. Although it is possible that hedge funds may think the stock is overpriced and view the stock as a short candidate, they may not be very familiar with the bullish thesis. In either case more research is warranted. Our calculations showed that top 15 most popular stocks among hedge funds returned 21.3% through April 8th and outperformed the S&P 500 ETF (SPY) by more than 5 percentage points. A handful of hedge funds were also right about betting on CPT, though not to the same extent, as the stock returned 16.4% and outperformed the market as well.