Hedge funds and large money managers usually invest with a focus on the long-term horizon and, therefore, short-lived dips on the charts, usually don’t make them change their opinion towards a company. This time it may be different. During the fourth quarter of 2018 we observed increased volatility and small-cap stocks underperformed the market. Hedge fund investor letters indicated that they are cutting their overall exposure, closing out some position and doubling down on others. Let’s take a look at the hedge fund sentiment towards BT Group plc (NYSE:BT) to find out whether it was one of their high conviction long-term ideas.

BT Group plc (NYSE:BT) has seen an increase in activity from the world’s largest hedge funds of late. Our calculations also showed that BT isn’t among the 30 most popular stocks among hedge funds.

At Q4’s end, a total of 9 of the hedge funds tracked by Insider Monkey were bullish on this stock, a change of 50% from the previous quarter. The graph below displays the number of hedge funds with bullish position in BT over the last 14 quarters. With hedge funds’ sentiment swirling, there exists a select group of noteworthy hedge fund managers who were increasing their stakes substantially (or already accumulated large positions). 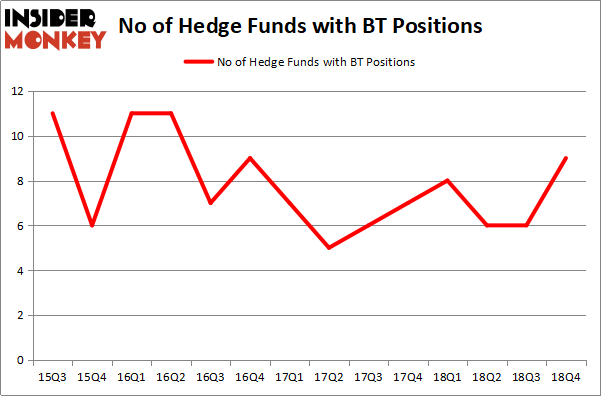 Of the funds tracked by Insider Monkey, Arrowstreet Capital, managed by Peter Rathjens, Bruce Clarke and John Campbell, holds the largest position in BT Group plc (NYSE:BT). Arrowstreet Capital has a $7.1 million position in the stock, comprising less than 0.1%% of its 13F portfolio. The second most bullish fund manager is Jim Simons of Renaissance Technologies, with a $6.4 million position; the fund has less than 0.1%% of its 13F portfolio invested in the stock. Other members of the smart money that hold long positions contain Israel Englander’s Millennium Management, Steve Cohen’s Point72 Asset Management and Matthew Tewksbury’s Stevens Capital Management.

With a general bullishness amongst the heavyweights, key hedge funds were breaking ground themselves. Millennium Management established the most valuable position in BT Group plc (NYSE:BT). Millennium Management had $1.3 million invested in the company at the end of the quarter. Steve Cohen’s Point72 Asset Management also initiated a $0.8 million position during the quarter. The other funds with new positions in the stock are Matthew Tewksbury’s Stevens Capital Management, Peter S. Stamos’s Stamos Capital, and Ken Griffin’s Citadel Investment Group.

As you can see these stocks had an average of 24.75 hedge funds with bullish positions and the average amount invested in these stocks was $916 million. That figure was $18 million in BT’s case. Sempra Energy (NYSE:SRE) is the most popular stock in this table. On the other hand Canon Inc. (NYSE:CAJ) is the least popular one with only 6 bullish hedge fund positions. BT Group plc (NYSE:BT) is not the least popular stock in this group but hedge fund interest is still below average. This is a slightly negative signal and we’d rather spend our time researching stocks that hedge funds are piling on. Our calculations showed that top 15 most popular stocks among hedge funds returned 19.7% through March 15th and outperformed the S&P 500 ETF (SPY) by 6.6 percentage points. Unfortunately BT wasn’t in this group. Hedge funds that bet on BT were disappointed as the stock returned 0.3% and underperformed the market. If you are interested in investing in large cap stocks, you should check out the top 15 hedge fund stocks as 13 of these outperformed the market.