The 700+ hedge funds and money managers tracked by Insider Monkey have already compiled and submitted their 13F filings for the second quarter, which unveil their equity positions as of September 30. We went through these filings, fixed typos and other more significant errors and identified the changes in hedge fund positions. Our extensive review of these public filings is finally over, so this article is set to reveal the smart money sentiment towards BioMarin Pharmaceutical Inc. (NASDAQ:BMRN).

Is BioMarin Pharmaceutical Inc. (NASDAQ:BMRN) going to take off soon? The best stock pickers are selling. The number of long hedge fund positions dropped by 1 in recent months. Our calculations also showed that BMRN isn’t among the 30 most popular stocks among hedge funds. BMRN was in 40 hedge funds’ portfolios at the end of September. There were 41 hedge funds in our database with BMRN holdings at the end of the previous quarter. 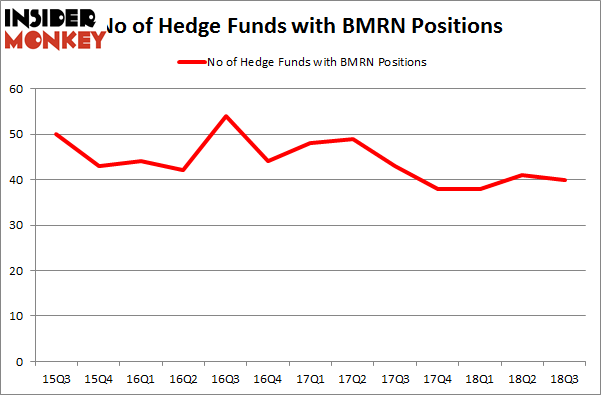 Since BioMarin Pharmaceutical Inc. (NASDAQ:BMRN) has faced a decline in interest from hedge fund managers, it’s easy to see that there was a specific group of hedgies that decided to sell off their entire stakes by the end of the third quarter. At the top of the heap, Doug Silverman and Alexander Klabin’s Senator Investment Group dropped the largest stake of all the hedgies watched by Insider Monkey, comprising close to $94.2 million in call options. Dmitry Balyasny’s fund, Balyasny Asset Management, also cut its call options, about $34.7 million worth. These transactions are interesting, as total hedge fund interest was cut by 1 funds by the end of the third quarter.

As you can see these stocks had an average of 23.5 hedge funds with bullish positions and the average amount invested in these stocks was $556 million. That figure was $2.25 billion in BMRN’s case. Ulta Beauty, Inc. (NASDAQ:ULTA) is the most popular stock in this table. On the other hand Korea Electric Power Corporation (NYSE:KEP) is the least popular one with only 4 bullish hedge fund positions. BioMarin Pharmaceutical Inc. (NASDAQ:BMRN) is not the most popular stock in this group but hedge fund interest is still above average. This is a slightly positive signal but we’d rather spend our time researching stocks that hedge funds are piling on. In this regard ULTA might be a better candidate to consider a long position.