As we already know from media reports and hedge fund investor letters, many hedge funds lost money in fourth quarter, blaming macroeconomic conditions and unpredictable events that hit several sectors, with technology among them. Nevertheless, most investors decided to stick to their bullish theses and their long-term focus allows us to profit from the recent declines. In particular, let’s take a look at what hedge funds think about Atara Biotherapeutics Inc (NASDAQ:ATRA) in this article.

Is Atara Biotherapeutics Inc (NASDAQ:ATRA) a safe stock to buy now? Prominent investors are becoming less confident. The number of bullish hedge fund bets went down by 1 recently. Our calculations also showed that ATRA isn’t among the 30 most popular stocks among hedge funds.

At the end of the fourth quarter, a total of 11 of the hedge funds tracked by Insider Monkey held long positions in this stock, a change of -8% from the previous quarter. The graph below displays the number of hedge funds with bullish position in ATRA over the last 14 quarters. So, let’s examine which hedge funds were among the top holders of the stock and which hedge funds were making big moves. 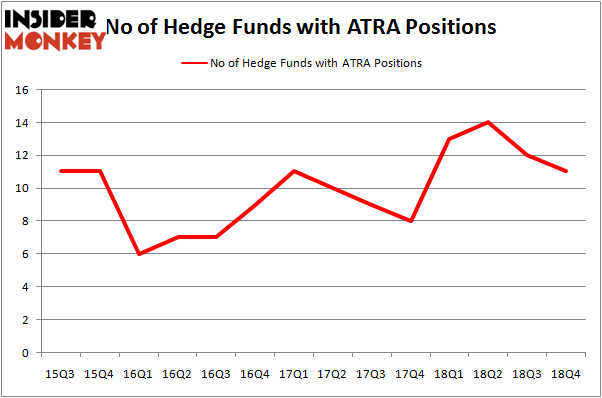 Among these funds, Baupost Group held the most valuable stake in Atara Biotherapeutics Inc (NASDAQ:ATRA), which was worth $217.3 million at the end of the fourth quarter. On the second spot was Redmile Group which amassed $153.4 million worth of shares. Moreover, Bridger Management, Camber Capital Management, and Point72 Asset Management were also bullish on Atara Biotherapeutics Inc (NASDAQ:ATRA), allocating a large percentage of their portfolios to this stock.

Since Atara Biotherapeutics Inc (NASDAQ:ATRA) has experienced declining sentiment from the smart money, logic holds that there is a sect of funds that slashed their positions entirely by the end of the third quarter. Interestingly, Brian Ashford-Russell and Tim Woolley’s Polar Capital dumped the biggest investment of the “upper crust” of funds monitored by Insider Monkey, comprising close to $4.1 million in call options, and Ken Griffin’s Citadel Investment Group was right behind this move, as the fund cut about $0.7 million worth. These moves are important to note, as aggregate hedge fund interest dropped by 1 funds by the end of the third quarter.

As you can see these stocks had an average of 13 hedge funds with bullish positions and the average amount invested in these stocks was $63 million. That figure was $566 million in ATRA’s case. Workiva Inc (NYSE:WK) is the most popular stock in this table. On the other hand Nexa Resources S.A. (NYSE:NEXA) is the least popular one with only 10 bullish hedge fund positions. Atara Biotherapeutics Inc (NASDAQ:ATRA) is not the least popular stock in this group but hedge fund interest is still below average. This is a slightly negative signal and we’d rather spend our time researching stocks that hedge funds are piling on. Our calculations showed that top 15 most popular stocks) among hedge funds returned 24.2% through April 22nd and outperformed the S&P 500 ETF (SPY) by more than 7 percentage points. Unfortunately ATRA wasn’t nearly as popular as these 15 stock (hedge fund sentiment was quite bearish); ATRA investors were disappointed as the stock returned -8.8% and underperformed the market. If you are interested in investing in large cap stocks with huge upside potential, you should check out the top 15 most popular stocks) among hedge funds as 13 of these stocks already outperformed the market this year.