Here is What Hedge Funds Think About Andeavor (ANDV)

Is Andeavor (NYSE:ANDV) a safe investment now? Prominent investors are becoming less hopeful. The number of bullish hedge fund positions went down by 4 in recent months. Our calculations also showed that ANDV isn’t among the 30 most popular stocks among hedge funds. ANDV was in 40 hedge funds’ portfolios at the end of September. There were 44 hedge funds in our database with ANDV holdings at the end of the previous quarter. 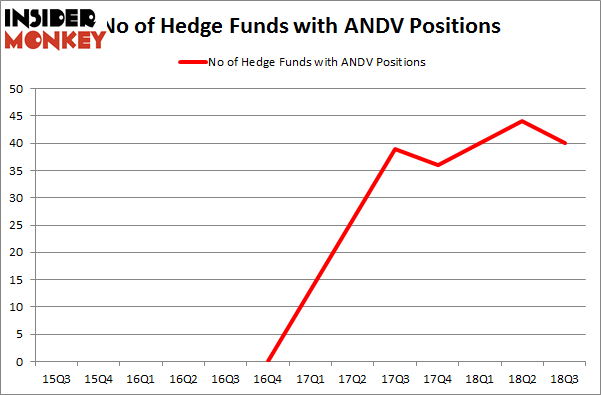 The largest stake in Andeavor (NYSE:ANDV) was held by Millennium Management, which reported holding $1106.1 million worth of stock at the end of September. It was followed by Carlson Capital with a $347.8 million position. Other investors bullish on the company included Steadfast Capital Management, Adage Capital Management, and Alpine Associates.

Because Andeavor (NYSE:ANDV) has faced bearish sentiment from the aggregate hedge fund industry, logic holds that there is a sect of hedge funds who sold off their full holdings by the end of the third quarter. It’s worth mentioning that Thomas Steyer’s Farallon Capital said goodbye to the largest position of all the hedgies monitored by Insider Monkey, totaling about $80 million in stock. Nick Niell’s fund, Arrowgrass Capital Partners, also said goodbye to its stock, about $54.5 million worth. These moves are intriguing to say the least, as aggregate hedge fund interest fell by 4 funds by the end of the third quarter.

As you can see these stocks had an average of 36.25 hedge funds with bullish positions and the average amount invested in these stocks was $1.88 billion. That figure was $2.95 billion in ANDV’s case. Rockwell Collins, Inc. (NYSE:COL) is the most popular stock in this table. On the other hand Rockwell Automation Inc. (NYSE:ROK) is the least popular one with only 28 bullish hedge fund positions. Andeavor (NYSE:ANDV) is not the most popular stock in this group but hedge fund interest is still above average. This is a slightly positive signal but we’d rather spend our time researching stocks that hedge funds are piling on. In this regard COL might be a better candidate to consider a long position.