Is America Movil SAB de CV (NYSE:AMX) the right investment to pursue these days? Investors who are in the know are taking a bullish view. The number of bullish hedge fund bets increased by 2 in recent months. Our calculations also showed that AMX isn’t among the 30 most popular stocks among hedge funds. AMX was in 12 hedge funds’ portfolios at the end of the fourth quarter of 2018. There were 10 hedge funds in our database with AMX positions at the end of the previous quarter.

In today’s marketplace there are several tools investors employ to assess their stock investments. A duo of the less utilized tools are hedge fund and insider trading sentiment. Our experts have shown that, historically, those who follow the best picks of the best hedge fund managers can trounce the market by a solid margin (see the details here).

At the end of the fourth quarter, a total of 12 of the hedge funds tracked by Insider Monkey held long positions in this stock, a change of 20% from the second quarter of 2018. The graph below displays the number of hedge funds with bullish position in AMX over the last 14 quarters. So, let’s review which hedge funds were among the top holders of the stock and which hedge funds were making big moves. 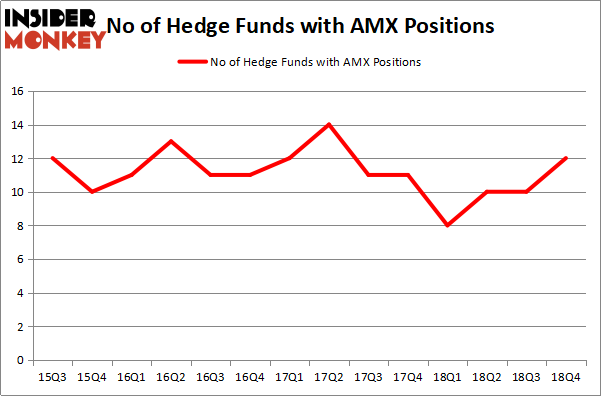 The largest stake in America Movil SAB de CV (NYSE:AMX) was held by Fisher Asset Management, which reported holding $169.7 million worth of stock at the end of September. It was followed by Millennium Management with a $42 million position. Other investors bullish on the company included Renaissance Technologies, AQR Capital Management, and Dalton Investments.

Now, key hedge funds were leading the bulls’ herd. GLG Partners, managed by Noam Gottesman, assembled the biggest position in America Movil SAB de CV (NYSE:AMX). GLG Partners had $3.6 million invested in the company at the end of the quarter. Thomas Bailard’s Bailard Inc also made a $1.1 million investment in the stock during the quarter. The other funds with brand new AMX positions are Paul Marshall and Ian Wace’s Marshall Wace LLP and Louis Navellier’s Navellier & Associates.

As you can see these stocks had an average of 28 hedge funds with bullish positions and the average amount invested in these stocks was $3113 million. That figure was $245 million in AMX’s case. Dominion Energy, Inc. (NYSE:D) is the most popular stock in this table. On the other hand Honda Motor Co Ltd (NYSE:HMC) is the least popular one with only 13 bullish hedge fund positions. Compared to these stocks America Movil SAB de CV (NYSE:AMX) is even less popular than HMC. Our calculations showed that top 15 most popular stocks among hedge funds returned 19.7% through March 15th and outperformed the S&P 500 ETF (SPY) by 6.6 percentage points. As you may have guessed AMX wasn’t in this group. Hedge funds that bet on AMX were disappointed as the stock returned 2.1% and underperformed the market. If you are interested in investing in large cap stocks, you should check out the top 15 hedge fund stocks as 13 of these outperformed the market.