Here is What Hedge Funds Think About Amcor plc (AMCR)

As we already know from media reports and hedge fund investor letters, hedge funds delivered their best returns in a decade. Most investors who decided to stick with hedge funds after a rough 2018 recouped their losses by the end of the second quarter. We get to see hedge funds’ thoughts towards the market and individual stocks by aggregating their quarterly portfolio movements and reading their investor letters. In this article, we will particularly take a look at what hedge funds think about Amcor plc (NYSE:AMCR).

Is Amcor plc (NYSE:AMCR) a healthy stock for your portfolio? The best stock pickers are getting more optimistic. The number of bullish hedge fund bets increased by 12 in recent months. Our calculations also showed that AMCR isn’t among the 30 most popular stocks among hedge funds (see the video below). AMCR was in 12 hedge funds’ portfolios at the end of June. There were 0 hedge funds in our database with AMCR positions at the end of the previous quarter.

At the moment there are a large number of metrics market participants employ to value their stock investments. A duo of the less known metrics are hedge fund and insider trading signals. We have shown that, historically, those who follow the top picks of the top hedge fund managers can beat the broader indices by a very impressive amount (see the details here).

Unlike some fund managers who are betting on Dow reaching 40000 in a year, our long-short investment strategy doesn’t rely on bull markets to deliver double digit returns. We only rely on hedge fund buy/sell signals. Let’s view the new hedge fund action encompassing Amcor plc (NYSE:AMCR).

Heading into the third quarter of 2019, a total of 12 of the hedge funds tracked by Insider Monkey were long this stock, a change of 12 from the previous quarter. Below, you can check out the change in hedge fund sentiment towards AMCR over the last 16 quarters. So, let’s review which hedge funds were among the top holders of the stock and which hedge funds were making big moves. 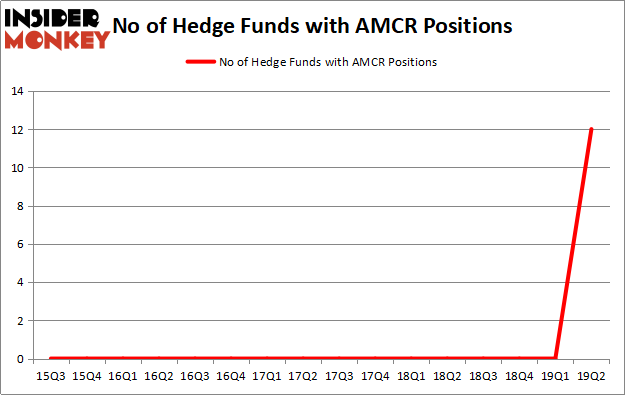 The largest stake in Amcor plc (NYSE:AMCR) was held by D E Shaw, which reported holding $75.9 million worth of stock at the end of March. It was followed by Adage Capital Management with a $22.7 million position. Other investors bullish on the company included Arrowstreet Capital, GLG Partners, and Renaissance Technologies.

With a general bullishness amongst the heavyweights, key money managers have been driving this bullishness. D E Shaw, managed by D. E. Shaw, initiated the most valuable position in Amcor plc (NYSE:AMCR). D E Shaw had $75.9 million invested in the company at the end of the quarter. Phill Gross and Robert Atchinson’s Adage Capital Management also made a $22.7 million investment in the stock during the quarter. The other funds with new positions in the stock are Peter Rathjens, Bruce Clarke and John Campbell’s Arrowstreet Capital, Noam Gottesman’s GLG Partners, and Renaissance Technologies.

As you can see these stocks had an average of 21.75 hedge funds with bullish positions and the average amount invested in these stocks was $593 million. That figure was $157 million in AMCR’s case. Slack Technologies Inc (NYSE:WORK) is the most popular stock in this table. On the other hand POSCO (NYSE:PKX) is the least popular one with only 12 bullish hedge fund positions. Compared to these stocks Amcor plc (NYSE:AMCR) is even less popular than PKX. Hedge funds dodged a bullet by taking a bearish stance towards AMCR. Our calculations showed that the top 20 most popular hedge fund stocks returned 24.4% in 2019 through September 30th and outperformed the S&P 500 ETF (SPY) by 4 percentage points. Unfortunately AMCR wasn’t nearly as popular as these 20 stocks (hedge fund sentiment was very bearish); AMCR investors were disappointed as the stock returned -14.1% during the third quarter and underperformed the market. If you are interested in investing in large cap stocks with huge upside potential, you should check out the top 20 most popular stocks among hedge funds as many of these stocks already outperformed the market so far in 2019.