We can judge whether Altria Group Inc (NYSE:MO) is a good investment right now by following the lead of some of the best investors in the world and piggybacking their ideas. There’s no better way to get these firms’ immense resources and analytical capabilities working for us than to follow their lead into their best ideas. While not all of these picks will be winners, our research shows that these picks historically outperformed the market when we factor in known risk factors.

Altria Group Inc (NYSE:MO) shares haven’t seen a lot of action during the third quarter. Overall, hedge fund sentiment was unchanged. The stock was in 41 hedge funds’ portfolios at the end of the fourth quarter of 2018. At the end of this article we will also compare MO to other stocks including United Technologies Corporation (NYSE:UTX), Toronto-Dominion Bank (NYSE:TD), and Texas Instruments Incorporated (NASDAQ:TXN) to get a better sense of its popularity.

If you’d ask most traders, hedge funds are perceived as unimportant, outdated investment vehicles of years past. While there are more than 8000 funds trading today, Our researchers look at the upper echelon of this group, approximately 750 funds. These money managers command the lion’s share of the hedge fund industry’s total capital, and by shadowing their matchless stock picks, Insider Monkey has revealed various investment strategies that have historically beaten Mr. Market. Insider Monkey’s flagship hedge fund strategy outrun the S&P 500 index by nearly 5 percentage points per year since its inception in May 2014 through early November 2018. We were able to generate large returns even by identifying short candidates. Our portfolio of short stocks lost 27.5% since February 2017 (through March 12th) even though the market was up nearly 25% during the same period. We just shared a list of 6 short targets in our latest quarterly update and they are already down an average of 6% in less than a month.

What have hedge funds been doing with Altria Group Inc (NYSE:MO)? 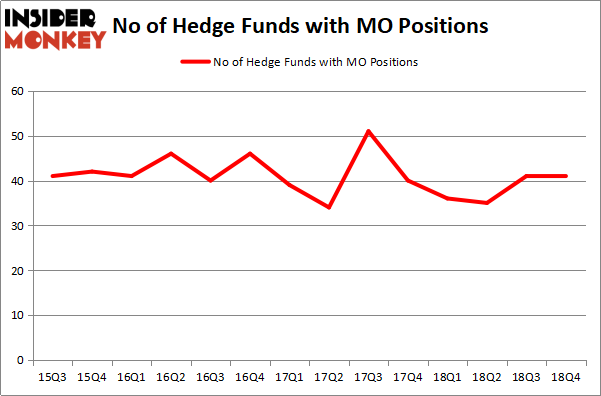 More specifically, Gardner Russo & Gardner was the largest shareholder of Altria Group Inc (NYSE:MO), with a stake worth $263.3 million reported as of the end of September. Trailing Gardner Russo & Gardner was Two Sigma Advisors, which amassed a stake valued at $147.5 million. Adage Capital Management, Renaissance Technologies, and Citadel Investment Group were also very fond of the stock, giving the stock large weights in their portfolios.

Due to the fact that Altria Group Inc (NYSE:MO) has witnessed bearish sentiment from the aggregate hedge fund industry, it’s easy to see that there was a specific group of fund managers who sold off their full holdings in the third quarter. It’s worth mentioning that George Soros’s Soros Fund Management dropped the largest stake of the 700 funds monitored by Insider Monkey, valued at about $10.6 million in call options, and Bruce Kovner’s Caxton Associates LP was right behind this move, as the fund dumped about $6 million worth. These moves are interesting, as total hedge fund interest stayed the same (this is a bearish signal in our experience).

As you can see these stocks had an average of 48 hedge funds with bullish positions and the average amount invested in these stocks was $3045 million. That figure was $915 million in MO’s case. Thermo Fisher Scientific Inc. (NYSE:TMO) is the most popular stock in this table. On the other hand Toronto-Dominion Bank (NYSE:TD) is the least popular one with only 17 bullish hedge fund positions. Altria Group Inc (NYSE:MO) is not the least popular stock in this group but hedge fund interest is still below average. Our calculations showed that top 15 most popular stocks among hedge funds returned 19.7% through March 15th and outperformed the S&P 500 ETF (SPY) by 6.6 percentage points. Hedge funds were also right about betting on MO, though not to the same extent, as the stock returned 14.9% and outperformed the market as well.