Here is What Hedge Funds Think About Allegion plc (ALLE)

After several tireless days we have finished crunching the numbers from nearly 750 13F filings issued by the elite hedge funds and other investment firms that we track at Insider Monkey, which disclosed those firms’ equity portfolios as of March 31. The results of that effort will be put on display in this article, as we share valuable insight into the smart money sentiment towards Allegion plc (NYSE:ALLE).

Is Allegion plc (NYSE:ALLE) undervalued? Prominent investors are in a bearish mood. The number of long hedge fund positions shrunk by 4 lately. Our calculations also showed that ALLE isn’t among the 30 most popular stocks among hedge funds.

To most stock holders, hedge funds are assumed to be worthless, old financial vehicles of years past. While there are greater than 8000 funds in operation at present, We look at the upper echelon of this club, about 750 funds. Most estimates calculate that this group of people direct the majority of the hedge fund industry’s total asset base, and by tailing their top stock picks, Insider Monkey has found numerous investment strategies that have historically defeated Mr. Market. Insider Monkey’s flagship hedge fund strategy outperformed the S&P 500 index by around 5 percentage points annually since its inception in May 2014 through the end of May. We were able to generate large returns even by identifying short candidates. Our portfolio of short stocks lost 30.9% since February 2017 (through May 30th) even though the market was up nearly 24% during the same period. We just shared a list of 5 short targets in our latest quarterly update and they are already down an average of 11.9% in less than a couple of weeks whereas our long picks outperformed the market by 2 percentage points in this volatile 2 week period.

What does the smart money think about Allegion plc (NYSE:ALLE)? 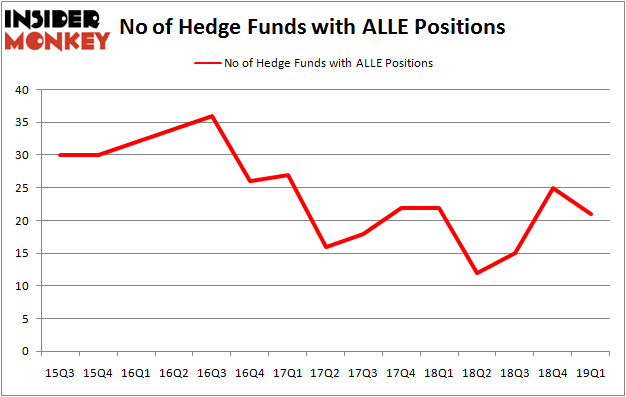 Among these funds, Generation Investment Management held the most valuable stake in Allegion plc (NYSE:ALLE), which was worth $323 million at the end of the first quarter. On the second spot was Intermede Investment Partners which amassed $64.7 million worth of shares. Moreover, Two Sigma Advisors, Echo Street Capital Management, and Citadel Investment Group were also bullish on Allegion plc (NYSE:ALLE), allocating a large percentage of their portfolios to this stock.

Due to the fact that Allegion plc (NYSE:ALLE) has witnessed falling interest from the aggregate hedge fund industry, it’s safe to say that there were a few fund managers that decided to sell off their positions entirely in the third quarter. At the top of the heap, Daniel Lascano’s Lomas Capital Management said goodbye to the biggest position of the “upper crust” of funds watched by Insider Monkey, valued at close to $14.1 million in stock. Matthew Tewksbury’s fund, Stevens Capital Management, also sold off its stock, about $5.8 million worth. These transactions are intriguing to say the least, as total hedge fund interest fell by 4 funds in the third quarter.

As you can see these stocks had an average of 31 hedge funds with bullish positions and the average amount invested in these stocks was $804 million. That figure was $496 million in ALLE’s case. Sarepta Therapeutics Inc (NASDAQ:SRPT) is the most popular stock in this table. On the other hand Tata Motors Limited (NYSE:TTM) is the least popular one with only 12 bullish hedge fund positions. Allegion plc (NYSE:ALLE) is not the least popular stock in this group but hedge fund interest is still below average. Our calculations showed that top 20 most popular stocks among hedge funds returned 1.9% in Q2 through May 30th and outperformed the S&P 500 ETF (SPY) by more than 3 percentage points. A small number of hedge funds were also right about betting on ALLE as the stock returned 9.7% during the same time frame and outperformed the market by an even larger margin.