Is Alaska Air Group, Inc. (NYSE:ALK) a good equity to bet on right now? We like to check what the smart money thinks first before doing extensive research. Although there have been several high profile failed hedge fund picks, the consensus picks among hedge fund investors have historically outperformed the market after adjusting for known risk attributes. It’s not surprising given that hedge funds have access to better information and more resources to find the latest market-moving information.

Alaska Air Group, Inc. (NYSE:ALK) was in 20 hedge funds’ portfolios at the end of September. ALK has experienced an increase in hedge fund sentiment lately. There were 19 hedge funds in our database with ALK holdings at the end of the previous quarter. Our calculations also showed that ALK isn’t among the 30 most popular stocks among hedge funds.

At the moment there are many methods market participants can use to evaluate stocks. Some of the most innovative methods are hedge fund and insider trading signals. We have shown that, historically, those who follow the top picks of the elite investment managers can trounce their index-focused peers by a superb margin (see the details here). 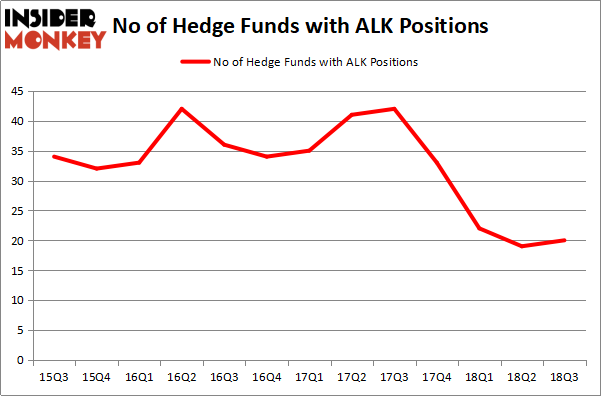 As you can see these stocks had an average of 29 hedge funds with bullish positions and the average amount invested in these stocks was $824 million. That figure was $462 million in ALK’s case. WPX Energy Inc (NYSE:WPX) is the most popular stock in this table. On the other hand IPG Photonics Corporation (NASDAQ:IPGP) is the least popular one with only 16 bullish hedge fund positions. Alaska Air Group, Inc. (NYSE:ALK) is not the least popular stock in this group but hedge fund interest is still below average. This is a slightly negative signal and we’d rather spend our time researching stocks that hedge funds are piling on. In this regard WPX might be a better candidate to consider a long position.