We at Insider Monkey have gone over 738 13F filings that hedge funds and famous value investors are required to file by the SEC. The 13F filings show the funds’ and investors’ portfolio positions as of March 31st. In this article we look at what those investors think of ACCO Brands Corporation (NYSE:ACCO).

Is ACCO Brands Corporation (NYSE:ACCO) ready to rally soon? Prominent investors are getting less optimistic. The number of bullish hedge fund positions retreated by 3 in recent months. Our calculations also showed that ACCO isn’t among the 30 most popular stocks among hedge funds.

At the moment there are plenty of methods stock traders employ to evaluate stocks. A duo of the most innovative methods are hedge fund and insider trading indicators. Our experts have shown that, historically, those who follow the top picks of the elite money managers can beat the market by a healthy margin (see the details here).

What does the smart money think about ACCO Brands Corporation (NYSE:ACCO)? 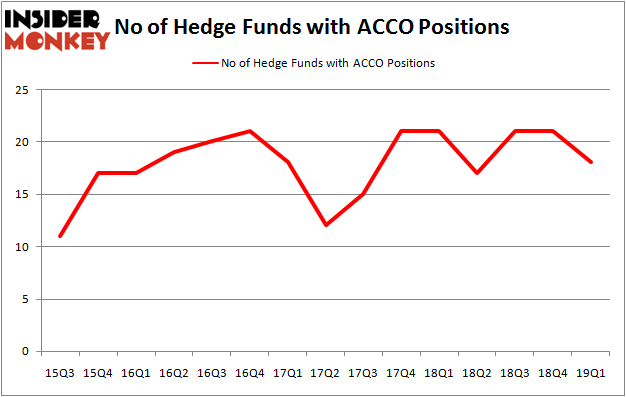 The largest stake in ACCO Brands Corporation (NYSE:ACCO) was held by D E Shaw, which reported holding $16.1 million worth of stock at the end of March. It was followed by Arrowstreet Capital with a $12.2 million position. Other investors bullish on the company included Ancora Advisors, AQR Capital Management, and Two Sigma Advisors.

Seeing as ACCO Brands Corporation (NYSE:ACCO) has faced falling interest from the smart money, it’s safe to say that there is a sect of hedgies that slashed their full holdings in the third quarter. Intriguingly, Paul Marshall and Ian Wace’s Marshall Wace LLP dropped the largest position of all the hedgies watched by Insider Monkey, valued at about $1.9 million in stock, and Charles Paquelet’s Skylands Capital was right behind this move, as the fund said goodbye to about $0.9 million worth. These transactions are important to note, as aggregate hedge fund interest was cut by 3 funds in the third quarter.

As you can see these stocks had an average of 20 hedge funds with bullish positions and the average amount invested in these stocks was $131 million. That figure was $50 million in ACCO’s case. Mr. Cooper Group Inc. (NASDAQ:COOP) is the most popular stock in this table. On the other hand AK Steel Holding Corporation (NYSE:AKS) is the least popular one with only 13 bullish hedge fund positions. ACCO Brands Corporation (NYSE:ACCO) is not the least popular stock in this group but hedge fund interest is still below average. This is a slightly negative signal and we’d rather spend our time researching stocks that hedge funds are piling on. Our calculations showed that top 20 most popular stocks among hedge funds returned 1.9% in Q2 through May 30th and outperformed the S&P 500 ETF (SPY) by more than 3 percentage points. Unfortunately ACCO wasn’t nearly as popular as these 20 stocks (hedge fund sentiment was quite bearish); ACCO investors were disappointed as the stock returned -11.5% during the same time period and underperformed the market. If you are interested in investing in large cap stocks with huge upside potential, you should check out the top 20 most popular stocks among hedge funds as 13 of these stocks already outperformed the market so far in Q2.