Here is What Hedge Funds Think About 360 Finance, Inc. (QFIN)

The financial regulations require hedge funds and wealthy investors that exceeded the $100 million equity holdings threshold to file a report that shows their positions at the end of every quarter. Even though it isn’t the intention, these filings to a certain extent level the playing field for ordinary investors. The latest round of 13F filings disclosed the funds’ positions on September 30th. We at Insider Monkey have made an extensive database of nearly 750 of those established hedge funds and famous value investors’ filings. In this article, we analyze how these elite funds and prominent investors traded 360 Finance, Inc. (NASDAQ:QFIN) based on those filings.

360 Finance, Inc. (NASDAQ:QFIN) shareholders have witnessed a decrease in enthusiasm from smart money lately. QFIN was in 4 hedge funds’ portfolios at the end of the third quarter of 2019. There were 9 hedge funds in our database with QFIN positions at the end of the previous quarter. Our calculations also showed that QFIN isn’t among the 30 most popular stocks among hedge funds (click for Q3 rankings and see the video below for Q2 rankings).

We leave no stone unturned when looking for the next great investment idea. For example Discover is offering this insane cashback card, so we look into shorting the stock. One of the most bullish analysts in America just put his money where his mouth is. He says, “I’m investing more today than I did back in early 2009.” So we check out his pitch. We read hedge fund investor letters and listen to stock pitches at hedge fund conferences. We even check out this option genius’ weekly trade ideas. This December, we recommended Adams Energy as a one-way bet based on an under-the-radar fund manager’s investor letter and the stock already gained 20 percent. Now let’s analyze the latest hedge fund action surrounding 360 Finance, Inc. (NASDAQ:QFIN).

At the end of the third quarter, a total of 4 of the hedge funds tracked by Insider Monkey held long positions in this stock, a change of -56% from one quarter earlier. By comparison, 0 hedge funds held shares or bullish call options in QFIN a year ago. With hedgies’ capital changing hands, there exists a few key hedge fund managers who were adding to their stakes considerably (or already accumulated large positions). 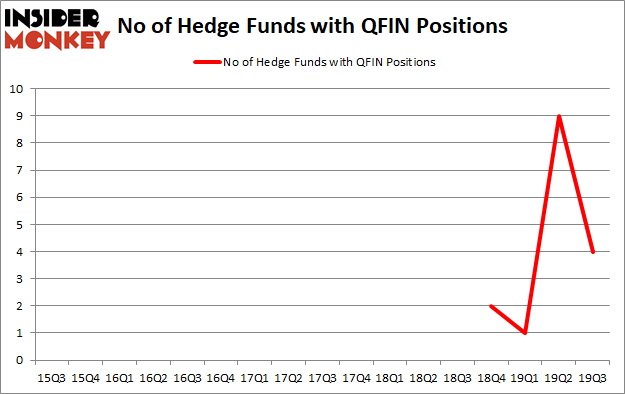 When looking at the institutional investors followed by Insider Monkey, Millennium Management, managed by Israel Englander, holds the biggest position in 360 Finance, Inc. (NASDAQ:QFIN). Millennium Management has a $0.4 million position in the stock, comprising less than 0.1%% of its 13F portfolio. Coming in second is Matthew Tewksbury of Stevens Capital Management, with a $0.1 million position; the fund has less than 0.1%% of its 13F portfolio invested in the stock. Some other professional money managers with similar optimism comprise Mike Vranos’s Ellington, Ken Griffin’s Citadel Investment Group and . In terms of the portfolio weights assigned to each position Ellington allocated the biggest weight to 360 Finance, Inc. (NASDAQ:QFIN), around 0.02% of its 13F portfolio. Stevens Capital Management is also relatively very bullish on the stock, earmarking 0.01 percent of its 13F equity portfolio to QFIN.

Seeing as 360 Finance, Inc. (NASDAQ:QFIN) has witnessed bearish sentiment from the aggregate hedge fund industry, we can see that there were a few funds who sold off their positions entirely by the end of the third quarter. Interestingly, David E. Shaw’s D E Shaw cut the largest position of all the hedgies watched by Insider Monkey, valued at an estimated $2.9 million in stock, and Jonathan Auerbach’s Hound Partners was right behind this move, as the fund said goodbye to about $2 million worth. These moves are important to note, as aggregate hedge fund interest was cut by 5 funds by the end of the third quarter.

As you can see these stocks had an average of 13 hedge funds with bullish positions and the average amount invested in these stocks was $83 million. That figure was $1 million in QFIN’s case. Ebix Inc (NASDAQ:EBIX) is the most popular stock in this table. On the other hand AeroVironment, Inc. (NASDAQ:AVAV) is the least popular one with only 10 bullish hedge fund positions. Compared to these stocks 360 Finance, Inc. (NASDAQ:QFIN) is even less popular than AVAV. Our calculations showed that top 20 most popular stocks among hedge funds returned 37.4% in 2019 through the end of November and outperformed the S&P 500 ETF (SPY) by 9.9 percentage points. A small number of hedge funds were also right about betting on QFIN, though not to the same extent, as the stock returned 6.7% during the fourth quarter (through 11/30) and outperformed the market as well.

Hedge Funds Are Dumping Regulus Therapeutics Inc (RGLS)
Monthly Newsletter Strategy
Download a free copy of our newsletter and see the details inside!
Hedge Fund Resource Center
Related News
Hedge Funds Have Never Been This Bullish On 360 Finance, Inc. (QFIN) 11 Companies That Caught Lying To The Public, Deceived Customers 10 Countries with the Highest Coffee Consumption in the World 10 Stocks That Went Up During The 2008 Crash
Billionaire Hedge Funds