Hedge funds are not perfect. They have their bad picks just like everyone else. Facebook, a stock hedge funds have loved, lost nearly 40% of its value at one point in 2018. Although hedge funds are not perfect, their consensus picks do deliver solid returns, however. Our data show the top 15 S&P 500 stocks among hedge funds at the end of December 2018 yielded an average return of 19.7% year-to-date, vs. a gain of 13.1% for the S&P 500 Index. Because hedge funds have a lot of resources and their consensus picks do well, we pay attention to what they think. In this article, we analyze what the elite funds think of Planet Fitness Inc (NYSE:PLNT).

In the 21st century investor’s toolkit there are a large number of signals shareholders employ to evaluate publicly traded companies. Some of the most useful signals are hedge fund and insider trading sentiment. Our experts have shown that, historically, those who follow the best picks of the best fund managers can outperform the S&P 500 by a solid amount (see the details here). 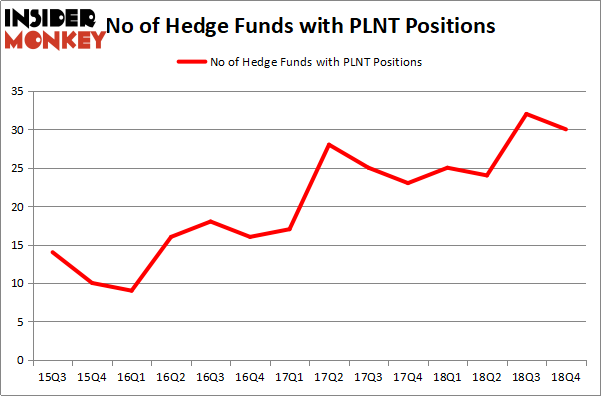 More specifically, Renaissance Technologies was the largest shareholder of Planet Fitness Inc (NYSE:PLNT), with a stake worth $71.4 million reported as of the end of September. Trailing Renaissance Technologies was Newbrook Capital Advisors, which amassed a stake valued at $47.6 million. Daruma Asset Management, Waratah Capital Advisors, and Two Sigma Advisors were also very fond of the stock, giving the stock large weights in their portfolios.

Judging by the fact that Planet Fitness Inc (NYSE:PLNT) has experienced falling interest from hedge fund managers, it’s easy to see that there was a specific group of hedgies that slashed their entire stakes heading into Q3. Intriguingly, James Crichton’s Hitchwood Capital Management dumped the biggest stake of all the hedgies watched by Insider Monkey, worth an estimated $32.4 million in stock, and Guy Shahar’s DSAM Partners was right behind this move, as the fund said goodbye to about $18.1 million worth. These bearish behaviors are intriguing to say the least, as total hedge fund interest dropped by 2 funds heading into Q3.

As you can see these stocks had an average of 23 hedge funds with bullish positions and the average amount invested in these stocks was $382 million. That figure was $376 million in PLNT’s case. Carvana Co. (NYSE:CVNA) is the most popular stock in this table. On the other hand Galapagos NV (NASDAQ:GLPG) is the least popular one with only 15 bullish hedge fund positions. Planet Fitness Inc (NYSE:PLNT) is not the most popular stock in this group but hedge fund interest is still above average. Our calculations showed that top 15 most popular stocks) among hedge funds returned 24.2% through April 22nd and outperformed the S&P 500 ETF (SPY) by more than 7 percentage points. Hedge funds were also right about betting on PLNT as the stock returned 37.5% and outperformed the market by an even larger margin. Hedge funds were rewarded for their relative bullishness.