How do we determine whether Lululemon Athletica inc. (NASDAQ:LULU) makes for a good investment at the moment? We analyze the sentiment of a select group of the very best investors in the world, who spend immense amounts of time and resources studying companies. They may not always be right (no one is), but data shows that their consensus long positions have historically outperformed the market when we adjust for known risk factors.

Lululemon Athletica inc. (NASDAQ:LULU) has experienced a decrease in support from the world’s most elite money managers of late. Our calculations also showed that LULU isn’t among the 30 most popular stocks among hedge funds.

Today there are a lot of methods shareholders put to use to analyze publicly traded companies. Some of the less known methods are hedge fund and insider trading signals. We have shown that, historically, those who follow the best picks of the best fund managers can outclass their index-focused peers by a superb margin (see the details here).

How have hedgies been trading Lululemon Athletica inc. (NASDAQ:LULU)? 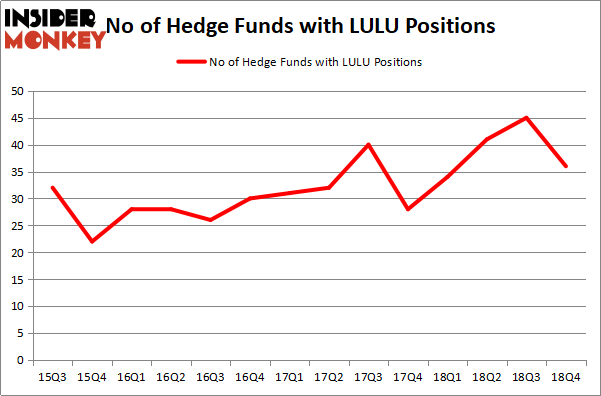 According to Insider Monkey’s hedge fund database, Cliff Asness’s AQR Capital Management has the largest position in Lululemon Athletica inc. (NASDAQ:LULU), worth close to $297 million, corresponding to 0.3% of its total 13F portfolio. Coming in second is Peter Rathjens, Bruce Clarke and John Campbell of Arrowstreet Capital, with a $126.1 million position; 0.3% of its 13F portfolio is allocated to the stock. Other professional money managers that hold long positions include D. E. Shaw’s D E Shaw, and Steve Cohen’s Point72 Asset Management.

Since Lululemon Athletica inc. (NASDAQ:LULU) has faced a decline in interest from the smart money, we can see that there exists a select few money managers that decided to sell off their full holdings in the third quarter. It’s worth mentioning that Jim Simons’s Renaissance Technologies said goodbye to the biggest investment of the “upper crust” of funds followed by Insider Monkey, comprising an estimated $109.1 million in stock. James Crichton’s fund, Hitchwood Capital Management, also said goodbye to its stock, about $81.2 million worth. These bearish behaviors are important to note, as total hedge fund interest fell by 9 funds in the third quarter.

As you can see these stocks had an average of 29.5 hedge funds with bullish positions and the average amount invested in these stocks was $976 million. That figure was $933 million in LULU’s case. IDEXX Laboratories, Inc. (NASDAQ:IDXX) is the most popular stock in this table. On the other hand Ameren Corporation (NYSE:AEE) is the least popular one with only 23 bullish hedge fund positions. Compared to these stocks Lululemon Athletica inc. (NASDAQ:LULU) is more popular among hedge funds even though it experienced a small decline in hedge fund sentiment in the last quarter. Our calculations showed that top 15 most popular stocks among hedge funds returned 19.7% through March 15th and outperformed the S&P 500 ETF (SPY) by 6.6 percentage points. Hedge funds were also right about betting on LULU, though not to the same extent, as the stock returned 16.6% and outperformed the market as well.