Hormel Foods Corporation (NYSE:HRL) investors should pay attention to an increase in activity from the world’s largest hedge funds of late. HRL was in 18 hedge funds’ portfolios at the end of the fourth quarter of 2018. There were 12 hedge funds in our database with HRL positions at the end of the previous quarter. This seems like a bullish indicator on the surface but our calculations also showed that HRL isn’t among the 30 most popular stocks among hedge funds. 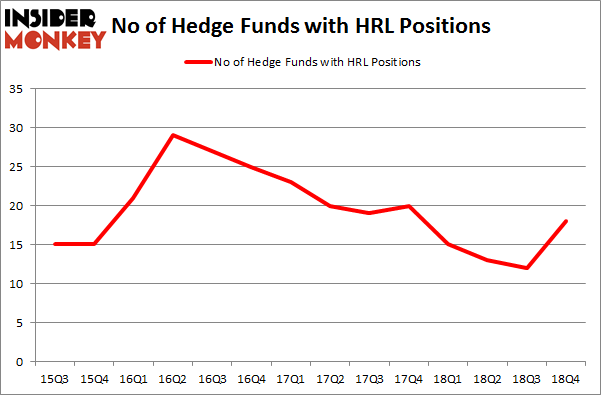 According to Insider Monkey’s hedge fund database, AQR Capital Management, managed by Cliff Asness, holds the largest position in Hormel Foods Corporation (NYSE:HRL). AQR Capital Management has a $66.3 million position in the stock, comprising 0.1% of its 13F portfolio. The second largest stake is held by Adage Capital Management, managed by Phill Gross and Robert Atchinson, which holds a $14.4 million position; less than 0.1%% of its 13F portfolio is allocated to the stock. Other members of the smart money that are bullish comprise Peter Rathjens, Bruce Clarke and John Campbell’s Arrowstreet Capital, Tom Russo’s Gardner Russo & Gardner and Joel Greenblatt’s Gotham Asset Management.

Now, key money managers have been driving this bullishness. Arrowstreet Capital assembled the biggest position in Hormel Foods Corporation (NYSE:HRL). Arrowstreet Capital had $8.2 million invested in the company at the end of the quarter. Joel Greenblatt’s Gotham Asset Management also made a $5.6 million investment in the stock during the quarter. The other funds with new positions in the stock are Brandon Haley’s Holocene Advisors, James Dondero’s Highland Capital Management, and Anand Parekh’s Alyeska Investment Group.

As you can see these stocks had an average of 31.25 hedge funds with bullish positions and the average amount invested in these stocks was $2217 million. That figure was $126 million in HRL’s case. United Continental Holdings Inc (NASDAQ:UAL) is the most popular stock in this table. On the other hand Brown-Forman Corporation (NYSE:BF-B) is the least popular one with only 21 bullish hedge fund positions. Compared to these stocks Hormel Foods Corporation (NYSE:HRL) is even less popular than BF-B. Our calculations showed that top 15 most popular stocks among hedge funds returned 19.7% through March 15th and outperformed the S&P 500 ETF (SPY) by 6.6 percentage points. Unfortunately HRL wasn’t in this group. New hedge funds that bet on HRL were disappointed as the stock returned 0.2% and underperformed the market. If you are interested in investing in large cap stocks, you should check out the top 15 hedge fund stocks as 13 of these outperformed the market.