The elite funds run by legendary investors such as David Tepper and Dan Loeb make hundreds of millions of dollars for themselves and their investors by spending enormous resources doing research on small cap stocks that big investment banks don’t follow. Because of their pay structures, they have strong incentives to do the research necessary to beat the market. That’s why we pay close attention to what they think in small cap stocks. In this article, we take a closer look at ASGN Incorporated (NYSE:ASGN) from the perspective of those elite funds.

Is ASGN Incorporated (NYSE:ASGN) a superb investment now? The best stock pickers are in a pessimistic mood at the margin. The number of long hedge fund positions were trimmed by 2 recently. Our calculations also showed that ASGN isn’t among the 30 most popular stocks among hedge funds (see the video below). However, overall hedge fund sentiment towards the stock is still pretty robust compared to its peers.

What have hedge funds been doing with ASGN Incorporated (NYSE:ASGN)? 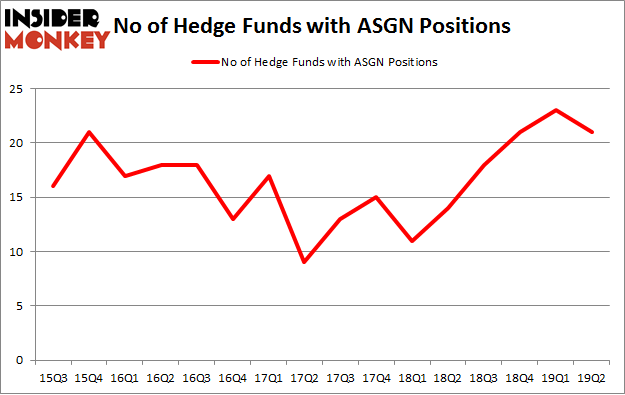 Among these funds, Select Equity Group held the most valuable stake in ASGN Incorporated (NYSE:ASGN), which was worth $43.6 million at the end of the second quarter. On the second spot was Citadel Investment Group which amassed $39.1 million worth of shares. Moreover, Millennium Management, Incline Global Management, and Marshall Wace LLP were also bullish on ASGN Incorporated (NYSE:ASGN), allocating a large percentage of their portfolios to this stock.

Because ASGN Incorporated (NYSE:ASGN) has experienced bearish sentiment from the entirety of the hedge funds we track, we can see that there is a sect of funds that slashed their positions entirely in the second quarter. It’s worth mentioning that Chuck Royce’s Royce & Associates dumped the largest investment of the 750 funds followed by Insider Monkey, valued at about $2.1 million in stock, and Dmitry Balyasny’s Balyasny Asset Management was right behind this move, as the fund said goodbye to about $1.3 million worth. These moves are intriguing to say the least, as aggregate hedge fund interest dropped by 2 funds in the second quarter.

As you can see these stocks had an average of 14.5 hedge funds with bullish positions and the average amount invested in these stocks was $296 million. That figure was $207 million in ASGN’s case. Commscope Holding Company Inc (NASDAQ:COMM) is the most popular stock in this table. On the other hand Liberty Latin America Ltd. (NASDAQ:LILA) is the least popular one with only 11 bullish hedge fund positions. Compared to these stocks ASGN Incorporated (NYSE:ASGN) is more popular among hedge funds. Our calculations showed that top 20 most popular stocks among hedge funds returned 24.4% in 2019 through September 30th and outperformed the S&P 500 ETF (SPY) by 4 percentage points. Hedge funds were also right about betting on ASGN, though not to the same extent, as the stock returned 3.7% during the third quarter and outperformed the market as well.

Here is What Hedge Funds Think About Alcoa Corporation (AA)
Monthly Newsletter Strategy
Download a free copy of our newsletter and see the details inside!
Hedge Fund Resource Center
Related News
Hedge Funds Have Never Been This Bullish On ASGN Incorporated (ASGN) Hedge Funds Have Never Been More Bullish On ASGN Incorporated (ASGN) Should You Buy ASGN Incorporated (ASGN)? CEO-CFO Duo at U.S. Building Supplier Sell Shares After Agreeing to be Acquired by Australia’s Boral, Plus Other Insider Trading Activity Amid Slowing Insider Buying Is On Assignment, Inc. (ASGN) A Good Stock To Buy? Xerox Corporation (XRX), On Assignment, Inc. (ASGN) & More: Why You Should Take a Closer Look at These Stocks Should You Avoid On Assignment, Inc. (ASGN)? 11 Largest Auto Insurance Companies In The US In 2019 10 Poorest Cities in America in 2019 8 Lowest Tar and Nicotine Cigarette Brands in 2019
Billionaire Hedge Funds