While the market driven by short-term sentiment influenced by uncertainty regarding the future of the interest rate environment in the US, declining oil prices and the trade war with China, many smart money investors kept their optimism regarding the current bull run in the fourth quarter, while still hedging many of their long positions. However, as we know, big investors usually buy stocks with strong fundamentals, which is why we believe we can profit from imitating them. In this article, we are going to take a look at the smart money sentiment surrounding Ares Capital Corporation (NASDAQ:ARCC).

Ares Capital Corporation (NASDAQ:ARCC) has experienced an increase in activity from the world’s largest hedge funds lately. ARCC was in 26 hedge funds’ portfolios at the end of the fourth quarter of 2018. There were 25 hedge funds in our database with ARCC holdings at the end of the previous quarter. Our calculations also showed that ARCC isn’t among the 30 most popular stocks among hedge funds.

What does the smart money think about Ares Capital Corporation (NASDAQ:ARCC)?

At Q4’s end, a total of 26 of the hedge funds tracked by Insider Monkey were bullish on this stock, a change of 4% from one quarter earlier. On the other hand, there were a total of 24 hedge funds with a bullish position in ARCC a year ago. With the smart money’s sentiment swirling, there exists a select group of key hedge fund managers who were increasing their holdings meaningfully (or already accumulated large positions). 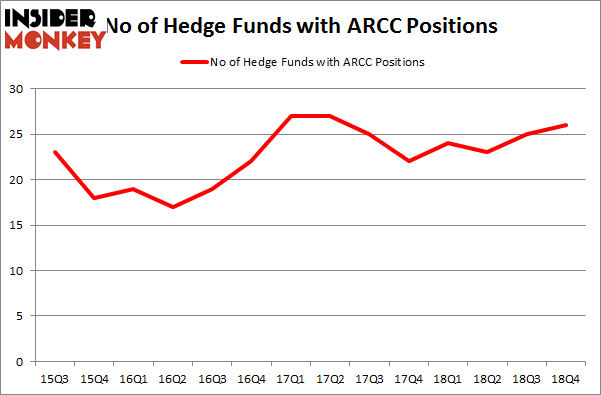 According to Insider Monkey’s hedge fund database, D. E. Shaw’s D E Shaw has the biggest position in Ares Capital Corporation (NASDAQ:ARCC), worth close to $58.7 million, comprising 0.1% of its total 13F portfolio. Sitting at the No. 2 spot is Alyeska Investment Group, led by Anand Parekh, holding a $34.5 million position; the fund has 0.5% of its 13F portfolio invested in the stock. Some other hedge funds and institutional investors that are bullish include John Overdeck and David Siegel’s Two Sigma Advisors, Charles Clough’s Clough Capital Partners and Israel Englander’s Millennium Management.

As aggregate interest increased, some big names were breaking ground themselves. Weld Capital Management, managed by Minhua Zhang, established the biggest position in Ares Capital Corporation (NASDAQ:ARCC). Weld Capital Management had $1.7 million invested in the company at the end of the quarter. Ray Dalio’s Bridgewater Associates also made a $1.5 million investment in the stock during the quarter. The other funds with new positions in the stock are George Zweig, Shane Haas and Ravi Chander’s Signition LP and Steve Cohen’s Point72 Asset Management.

As you can see these stocks had an average of 26.5 hedge funds with bullish positions and the average amount invested in these stocks was $519 million. That figure was $236 million in ARCC’s case. RingCentral Inc (NYSE:RNG) is the most popular stock in this table. On the other hand Public Joint-Stock Company Mobile TeleSystems (NYSE:MBT) is the least popular one with only 12 bullish hedge fund positions. Ares Capital Corporation (NASDAQ:ARCC) is not the least popular stock in this group but hedge fund interest is still below average. This is a slightly negative signal and we’d rather spend our time researching stocks that hedge funds are piling on. Our calculations showed that top 15 most popular stocks among hedge funds returned 21.3% through April 8th and outperformed the S&P 500 ETF (SPY) by more than 5 percentage points. Unfortunately ARCC wasn’t in this group. Hedge funds that bet on ARCC were disappointed as the stock returned 14.7% and underperformed the market. If you are interested in investing in large cap stocks, you should check out the top 15 hedge fund stocks as 12 of these outperformed the market.