Facebook Inc (NASDAQ:FB) shares suffered large losses in the second half of 2018, dropping to $131 by the end of the year. We completed processing the 13F filings of nearly 750 hedge funds for the first quarter of this year and noticed that hedge funds saw the 2018 declines as a huge buying opportunity and piled on the stock.

Facebook Inc (NASDAQ:FB) investors should be aware of a huge increase in hedge fund interest lately. The number of hedge funds with bullish bets jumped by 15 during the first quarter and propelled Facebook into the #1 position among the 30 most popular stocks among hedge funds.

In the financial world there are a large number of tools investors have at their disposal to grade stocks. A pair of the most under-the-radar tools are hedge fund and insider trading indicators. We have shown that, historically, those who follow the top picks of the best fund managers can outperform the broader indices by a solid amount. Insider Monkey’s flagship best performing hedge funds strategy returned 25.8% year to date (through May 30th) and outperformed the market even though it draws its stock picks among smaller cap stocks. This strategy also outperformed the market by 40 percentage points since its inception (see the details here). That’s why we believe hedge fund sentiment is a useful indicator that investors should pay attention to.

Heading into the second quarter of 2019, a total of 176 of the hedge funds tracked by Insider Monkey were bullish on this stock, a change of 9% from the fourth quarter of 2018. The graph below displays the number of hedge funds with bullish position in FB over the last 15 quarters. You can see that hedge fund interest in Facebook peaked a year ago before the large decline in Facebook shares and bottomed at the end of 2018. Hedge funds seem to be buying and selling Facebook shares at the right time. Let’s review which hedge funds were among the top holders of the stock and which hedge funds were making big moves. 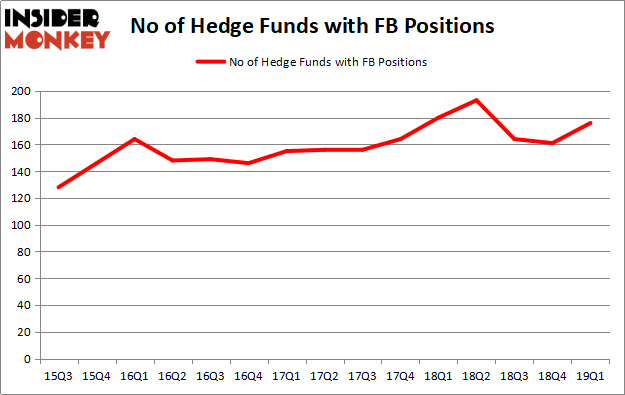 More specifically, Tiger Global Management LLC was the largest shareholder of Facebook Inc (NASDAQ:FB), with a stake worth $1473.2 million reported as of the end of March. Trailing Tiger Global Management was Citadel Investment Group, which amassed a stake valued at $1176.8 million. AQR Capital Management, Citadel Investment Group, and Lone Pine Capital were also very fond of the stock, giving the stock large weights in their portfolios.

With a general bullishness amongst the heavyweights, some big names were breaking ground themselves. D1 Capital Partners, managed by Daniel Sundheim, created the biggest position in Facebook Inc (NASDAQ:FB). D1 Capital Partners had $332.5 million invested in the company at the end of the quarter. Doug Silverman and Alexander Klabin’s Senator Investment Group also made a $159.2 million investment in the stock during the quarter. The following funds were also among the new FB investors: David Goel and Paul Ferri’s Matrix Capital Management, Robert Pitts’s Steadfast Capital Management, and Edmond M. Safra’s EMS Capital.

As you can see these stocks had an average of 89.75 hedge funds with bullish positions and the average amount invested in these stocks was $8.6 billion. That figure was $18.4 billion in FB’s case. Visa Inc (NYSE:V) is the most popular stock in this table. On the other hand Exxon Mobil Corporation (NYSE:XOM) is the least popular one with only 49 bullish hedge fund positions. Compared to these stocks Facebook Inc (NASDAQ:FB) is more popular among hedge funds. Our calculations showed that top 20 most popular stocks among hedge funds returned 1.9% in Q2 through May 30th and outperformed the S&P 500 ETF (SPY) by more than 3 percentage points. Hedge funds were also right about betting on FB as the stock returned 9.8% during the same period and outperformed the market by an even larger margin. Hedge funds were clearly right about piling into this stock relative to other stocks with similar market capitalizations.