Here is the 8th Most Popular Stock Among Hedge Funds

Insider Monkey finished processing more than 730 13F filings submitted by hedge funds and prominent investors. These filings show these funds’ portfolio positions as of June 28th, 2019. What do these smart investors think about The Walt Disney Company (NYSE:DIS)?

Even though The Walt Disney Company (NYSE:DIS) shareholders have witnessed a decrease in support from the world’s most elite money managers recently, our calculations still showed that DIS ranks 8th among the 30 most popular stocks among hedge funds.

Unlike some fund managers who are betting on Dow reaching 40000 in a year, our long-short investment strategy doesn’t rely on bull markets to deliver double digit returns. We only rely on hedge fund buy/sell signals. Let’s analyze the latest hedge fund action regarding The Walt Disney Company (NYSE:DIS).

Heading into the third quarter of 2019, a total of 113 of the hedge funds tracked by Insider Monkey were bullish on this stock, a change of -1% from one quarter earlier. By comparison, 52 hedge funds held shares or bullish call options in DIS a year ago. With hedgies’ sentiment swirling, there exists a few noteworthy hedge fund managers who were upping their stakes considerably (or already accumulated large positions). 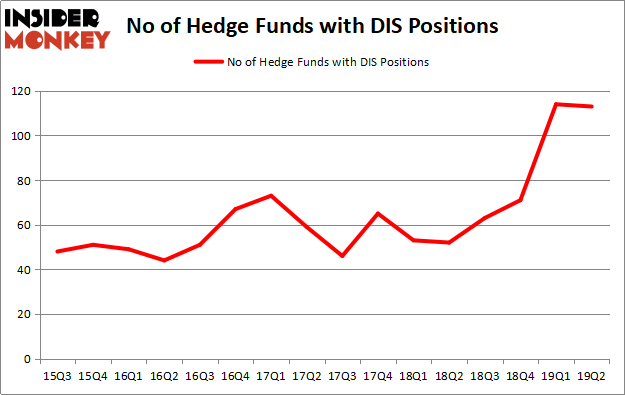 Since The Walt Disney Company (NYSE:DIS) has experienced a decline in interest from the smart money, it’s safe to say that there was a specific group of hedgies that elected to cut their entire stakes by the end of the second quarter. It’s worth mentioning that Andreas Halvorsen’s Viking Global said goodbye to the biggest position of all the hedgies monitored by Insider Monkey, totaling close to $241.2 million in stock. Benjamin A. Smith’s fund, Laurion Capital Management, also dropped its stock, about $226 million worth. These moves are interesting, as total hedge fund interest was cut by 1 funds by the end of the second quarter.

Was Rhizome Partners Right About Griffin Industrial Realty, Inc. (GRIF)?
Monthly Newsletter Strategy
Download a free copy of our newsletter and see the details inside!
Hedge Fund Resource Center
Related News
30 Most Popular Stocks Among Hedge Funds in Q2 of 2019 How Disney and Other Hedge Fund Favorites Performed in Q2 KG Funds Management’s Return, AUM, and Holdings (Part II) Hedge Funds Have Never Been This Bullish On The Walt Disney Company (DIS) How to Play the Rise of the NBA The Winners and Losers of Game of Thrones Last Season 5 Ways The Smart Money is Playing the Billion Dollar Streaming Opportunity 10 Biggest Companies That Offer Pensions 15 Wealthiest Families in the World vs. First Generation Ultra Billionaires 5 Makeup Companies that Don’t Test on Animals
Billionaire Hedge Funds