Here is the 22nd Most Popular Stock Among Hedge Funds

Insider Monkey has processed numerous 13F filings of hedge funds and successful investors to create an extensive database of hedge fund holdings. The 13F filings show the hedge funds’ and successful investors’ positions as of the end of the first quarter. You can find write-ups about an individual hedge fund’s trades on numerous financial news websites. However, in this article we will take a look at their collective moves and analyze what the smart money thinks of Altaba Inc. (NASDAQ:AABA) based on that data.

Is Altaba Inc. (NASDAQ:AABA) worth your attention right now? Investors who are in the know are taking a bullish view. The number of bullish hedge fund bets advanced by 3 lately. Our calculations also showed that AABA ranked 22nd among the 30 most popular stocks among hedge funds. Altaba was extremely popular among hedge funds nearly 2 years ago, but they turned sour as the company didn’t seem to make a lot of progress selling itself. Nevertheless, several hedge funds are still bullish on the stock buying it instead of Alibaba.

In the eyes of most investors, hedge funds are perceived as underperforming, old financial tools of yesteryear. While there are greater than 8000 funds trading at present, Our experts look at the moguls of this club, around 750 funds. It is estimated that this group of investors handle the lion’s share of all hedge funds’ total asset base, and by keeping an eye on their matchless stock picks, Insider Monkey has determined a few investment strategies that have historically outpaced the S&P 500 index. Insider Monkey’s flagship hedge fund strategy surpassed the S&P 500 index by around 5 percentage points per annum since its inception in May 2014 through the end of May. We were able to generate large returns even by identifying short candidates. Our portfolio of short stocks lost 30.9% since February 2017 (through May 30th) even though the market was up nearly 24% during the same period. We just shared a list of 5 short targets in our latest quarterly update and they are already down an average of 11.9% in less than a couple of weeks whereas our long picks outperformed the market by 2 percentage points in this volatile 2 week period.

How have hedgies been trading Altaba Inc. (NASDAQ:AABA)?

At Q1’s end, a total of 76 of the hedge funds tracked by Insider Monkey held long positions in this stock, a change of 4% from one quarter earlier. By comparison, 100 hedge funds held shares or bullish call options in AABA a year ago. With the smart money’s sentiment swirling, there exists a select group of key hedge fund managers who were increasing their holdings considerably (or already accumulated large positions). 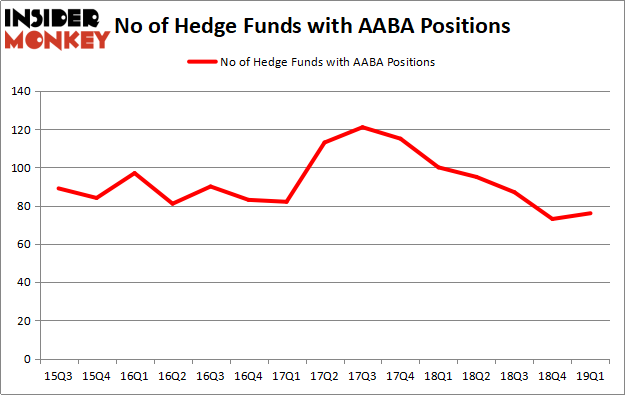 More specifically, Farallon Capital was the largest shareholder of Altaba Inc. (NASDAQ:AABA), with a stake worth $2046.3 million reported as of the end of March. Trailing Farallon Capital was Owl Creek Asset Management, which amassed a stake valued at $1466.2 million. HBK Investments, Millennium Management, and Aristeia Capital were also very fond of the stock, giving the stock large weights in their portfolios.

As you can see these stocks had an average of 29.75 hedge funds with bullish positions and the average amount invested in these stocks was $951 million. That figure was $15299 million in AABA’s case. Cognizant Technology Solutions Corp (NASDAQ:CTSH) is the most popular stock in this table. On the other hand Relx PLC (NYSE:RELX) is the least popular one with only 7 bullish hedge fund positions. Compared to these stocks Altaba Inc. (NASDAQ:AABA) is more popular among hedge funds. Our calculations showed that top 20 most popular stocks among hedge funds returned 1.9% in Q2 through May 30th and outperformed the S&P 500 ETF (SPY) by more than 3 percentage points. Unfortunately AABA wasn’t nearly as popular as these 20 stocks and hedge funds that were betting on AABA were disappointed as the stock returned -19.2% during the same period and underperformed the market. If you are interested in investing in large cap stocks with huge upside potential, you should check out the top 20 most popular stocks among hedge funds as 13 of these stocks already outperformed the market in the second quarter.