The Insider Monkey team has completed processing the quarterly 13F filings for the September quarter submitted by the hedge funds and other money managers included in our extensive database. Most hedge fund investors experienced strong gains on the back of a strong market performance, which certainly propelled them to adjust their equity holdings so as to maintain the desired risk profile. As a result, the relevancy of these public filings and their content is indisputable, as they may reveal numerous high-potential stocks. The following article will discuss the smart money sentiment towards Comcast Corporation (NASDAQ:CMCSA) and compare it against Novartis AG (NYSE:NVS), Pfizer Inc. (NYSE:PFE), PepsiCo, Inc. (NASDAQ:PEP), and Toyota Motor Corporation (NYSE:TM).

Is Comcast Corporation (NASDAQ:CMCSA) the right pick for your portfolio? The smart money is becoming less confident. The number of bullish hedge fund positions fell by 4 recently. Nevertheless, our calculations also showed that CMCSA ranked 22nd overall among the 30 most popular stocks among hedge funds (see the video below). CMCSA was in 82 hedge funds’ portfolios at the end of the third quarter of 2019. There were 86 hedge funds in our database with CMCSA positions at the end of June.

According to most stock holders, hedge funds are perceived as underperforming, outdated investment tools of years past. While there are over 8000 funds trading at present, We choose to focus on the upper echelon of this group, approximately 750 funds. These hedge fund managers watch over the majority of the smart money’s total capital, and by monitoring their top equity investments, Insider Monkey has deciphered various investment strategies that have historically outrun the S&P 500 index. Insider Monkey’s flagship short hedge fund strategy outpaced the S&P 500 short ETFs by around 20 percentage points per annum since its inception in May 2014. Our portfolio of short stocks lost 27.8% since February 2017 (through November 21st) even though the market was up more than 39% during the same period. We just shared a list of 7 short targets in our latest quarterly update .

We’re going to take a gander at the fresh hedge fund action regarding Comcast Corporation (NASDAQ:CMCSA). 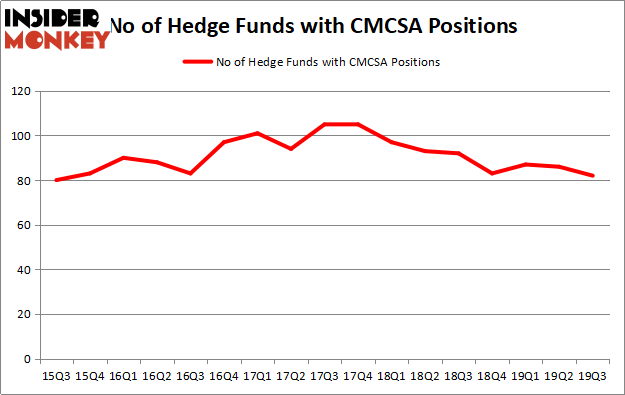 More specifically, Eagle Capital Management was the largest shareholder of Comcast Corporation (NASDAQ:CMCSA), with a stake worth $1534.7 million reported as of the end of September. Trailing Eagle Capital Management was First Pacific Advisors, which amassed a stake valued at $473.5 million. Arrowstreet Capital, AQR Capital Management, and BlueSpruce Investments were also very fond of the stock, becoming one of the largest hedge fund holders of the company. In terms of the portfolio weights assigned to each position BlueDrive Global Investors allocated the biggest weight to Comcast Corporation (NASDAQ:CMCSA), around 16.52% of its portfolio. 3G Capital is also relatively very bullish on the stock, earmarking 15.87 percent of its 13F equity portfolio to CMCSA.

Judging by the fact that Comcast Corporation (NASDAQ:CMCSA) has witnessed falling interest from the entirety of the hedge funds we track, we can see that there was a specific group of fund managers who sold off their full holdings in the third quarter. It’s worth mentioning that Renaissance Technologies dumped the biggest stake of the “upper crust” of funds tracked by Insider Monkey, comprising an estimated $207.3 million in stock. Aaron Cowen’s fund, Suvretta Capital Management, also said goodbye to its stock, about $87.6 million worth. These transactions are important to note, as total hedge fund interest dropped by 4 funds in the third quarter.

As you can see these stocks had an average of 37.75 hedge funds with bullish positions and the average amount invested in these stocks was $2366 million. That figure was $6385 million in CMCSA’s case. PepsiCo, Inc. (NASDAQ:PEP) is the most popular stock in this table. On the other hand Toyota Motor Corporation (NYSE:TM) is the least popular one with only 11 bullish hedge fund positions. Compared to these stocks Comcast Corporation (NASDAQ:CMCSA) is more popular among hedge funds. Our calculations showed that top 20 most popular stocks among hedge funds returned 34.7% in 2019 through November 22nd and outperformed the S&P 500 ETF (SPY) by 8.5 percentage points. Unfortunately CMCSA wasn’t nearly as popular as these 20 stocks and hedge funds that were betting on CMCSA were disappointed as the stock returned -0.2% during the fourth quarter (through 11/22) and underperformed the market. If you are interested in investing in large cap stocks with huge upside potential, you should check out the top 20 most popular stocks among hedge funds as 70 percent of these stocks already outperformed the market in Q4.