The market has been volatile in the last 6 months as the Federal Reserve continued its rate hikes and then abruptly reversed its stance, and uncertainty looms over trade negotiations with China. Small cap stocks have been hit hard as a result, as the Russell 2000 ETF (IWM) has underperformed the larger S&P 500 ETF (SPY) by nearly 9 percentage points. SEC filings and hedge fund investor letters indicate that the smart money seems to be paring back their overall long exposure since summer months, though some funds increased their exposure dramatically at the end of Q4 and the beginning of Q1. In this article, we analyze what the smart money thinks of Bank of America Corporation (NYSE:BAC) and find out how it is affected by hedge funds’ moves.

Bank of America Corporation (NYSE:BAC) was in 96 hedge funds’ portfolios at the end of the first quarter of 2019. BAC investors should pay attention to a decrease in support from the world’s most elite money managers in recent months. There were 99 hedge funds in our database with BAC holdings at the end of the previous quarter. Our calculations also showed that BAC ranks 12th among the 30 most popular stocks among hedge funds.

If you’d ask most stock holders, hedge funds are assumed to be worthless, old financial vehicles of yesteryear. While there are more than 8000 funds with their doors open at the moment, Our researchers choose to focus on the bigwigs of this group, about 750 funds. It is estimated that this group of investors shepherd bulk of the hedge fund industry’s total asset base, and by following their matchless equity investments, Insider Monkey has uncovered a number of investment strategies that have historically outpaced Mr. Market. Insider Monkey’s flagship hedge fund strategy beat the S&P 500 index by around 5 percentage points annually since its inception in May 2014 through the end of May. We were able to generate large returns even by identifying short candidates. Our portfolio of short stocks lost 30.9% since February 2017 (through May 30th) even though the market was up nearly 24% during the same period. We just shared a list of 5 short targets in our latest quarterly update and they are already down an average of 11.9% in less than a couple of weeks whereas our long picks outperformed the market by 2 percentage points in this volatile 2 week period.

What does the smart money think about Bank of America Corporation (NYSE:BAC)?

At the end of the first quarter, a total of 96 of the hedge funds tracked by Insider Monkey were long this stock, a change of -3% from one quarter earlier. The graph below displays the number of hedge funds with bullish position in BAC over the last 15 quarters. With hedge funds’ capital changing hands, there exists a select group of noteworthy hedge fund managers who were increasing their holdings meaningfully (or already accumulated large positions). 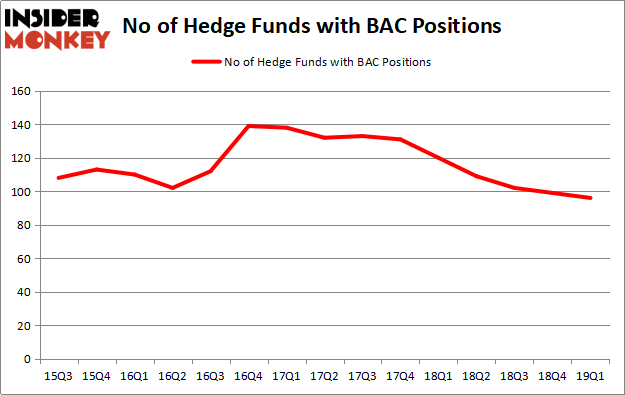 According to Insider Monkey’s hedge fund database, Warren Buffett’s Berkshire Hathaway has the number one position in Bank of America Corporation (NYSE:BAC), worth close to $24.7253 billion, corresponding to 12.4% of its total 13F portfolio. The second most bullish fund manager is Theleme Partners, led by Patrick Degorce, holding a $499.8 million position; the fund has 29.8% of its 13F portfolio invested in the stock. Some other peers that are bullish consist of Richard S. Pzena’s Pzena Investment Management, Robert Rodriguez and Steven Romick’s First Pacific Advisors LLC and Anand Desai’s Darsana Capital Partners.

Since Bank of America Corporation (NYSE:BAC) has witnessed declining sentiment from hedge fund managers, it’s easy to see that there were a few funds that slashed their entire stakes by the end of the third quarter. At the top of the heap, Richard Chilton’s Chilton Investment Company dropped the biggest investment of all the hedgies watched by Insider Monkey, totaling close to $74.4 million in stock. Matthew Knauer and Mina Faltas’s fund, Nokota Management, also cut its stock, about $73.9 million worth. These transactions are intriguing to say the least, as aggregate hedge fund interest dropped by 3 funds by the end of the third quarter.

Let’s go over hedge fund activity in other stocks – not necessarily in the same industry as Bank of America Corporation (NYSE:BAC) but similarly valued. These stocks are The Procter & Gamble Company (NYSE:PG), Verizon Communications Inc. (NYSE:VZ), Mastercard Incorporated (NYSE:MA), and Intel Corporation (NASDAQ:INTC). All of these stocks’ market caps are closest to BAC’s market cap.

As you can see these stocks had an average of 66 hedge funds with bullish positions and the average amount invested in these stocks was $6727 million. That figure was $29064 million in BAC’s case. Mastercard Incorporated (NYSE:MA) is the most popular stock in this table. On the other hand Verizon Communications Inc. (NYSE:VZ) is the least popular one with only 52 bullish hedge fund positions. Compared to these stocks Bank of America Corporation (NYSE:BAC) is more popular among hedge funds. Our calculations showed that top 20 most popular stocks among hedge funds returned 1.9% in Q2 through May 30th and outperformed the S&P 500 ETF (SPY) by more than 3 percentage points. Unfortunately BAC wasn’t nearly as successful as many of these 20 stocks and hedge funds that were betting on BAC were disappointed as the stock returned -1.6% during the same period and underperformed the market by a tiny margin. If you are interested in investing in large cap stocks with huge upside potential, you should check out the top 20 most popular stocks among hedge funds as 13 of these stocks already outperformed the market this year.