Before we spend days researching a stock idea we’d like to take a look at how hedge funds and billionaire investors recently traded that stock. S&P 500 Index ETF (SPY) lost 8.7% through October 26th. Forty percent of the S&P 500 constituents are down more than 10%. The average return of a randomly picked stock in the index is -9.5%. This means you (or a monkey throwing a dart) have less than an even chance of beating the market by randomly picking a stock. On the other hand, the top 25 most popular S&P 500 stocks among hedge funds had an average loss of 8.8%. In this article, we will take a look at what hedge funds think about Visa Inc (NYSE:V).

In the 21st century investor’s toolkit there are several indicators stock market investors put to use to size up stocks. Two of the most under-the-radar indicators are hedge fund and insider trading indicators. We have shown that, historically, those who follow the best picks of the top fund managers can beat their index-focused peers by a healthy amount. Insider Monkey’s flagship best performing hedge funds strategy returned 17.4% year to date and outperformed the market by more than 14 percentage points this year. This strategy also outperformed the market by 3 percentage points in the fourth quarter despite the market volatility (see the details here).

Heading into the fourth quarter of 2018, a total of 109 of the hedge funds tracked by Insider Monkey held long positions in this stock, a change of -6% from the second quarter of 2018. The graph below displays the number of hedge funds with bullish position in V over the last 6 quarters. With the smart money’s capital changing hands, there exists an “upper tier” of key hedge fund managers who were increasing their holdings significantly (or already accumulated large positions). 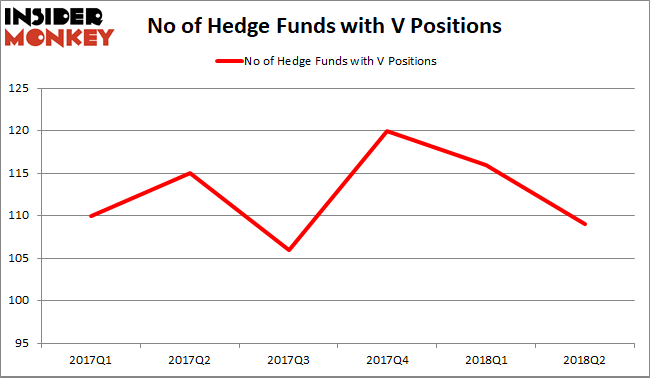 The largest stake in Visa Inc (NYSE:V) was held by Fisher Asset Management, which reported holding $2.3 billion worth of stock at the end of June. It was followed by Warren Buffett’s Berkshire Hathaway with a $1.4 billion position. Other investors bullish on the company included Hengistbury Investment Partners, KG Funds Management, and Aravt Global.

Because Visa Inc (NYSE:V) has faced bearish sentiment from the smart money, it’s easy to see that there were a few money managers that elected to cut their entire stakes by the end of the second quarter. It’s worth mentioning that Gabriel Plotkin’s Melvin Capital Management sold off the biggest stake of all the hedgies watched by Insider Monkey, valued at an estimated $350.7 million in stock. Larry Robbins’s fund, Glenview Capital, also dumped its stock, about $47.8 million worth. These transactions are important to note, as aggregate hedge fund interest fell by 7 funds by the end of the second quarter.

As you can see these stocks had an average of 71 hedge funds with bullish positions and the average amount invested in these stocks was $16.4 billion. That figure was $13 billion in V’s case. Bank of America Corp (NYSE:BAC) is the most popular stock in this table. On the other hand Chevron Corporation (NYSE:CVX) is the least popular one with only 50 bullish hedge fund positions.

Bank of America Corp earned the most popular financial stock among hedge funds title from Visa. Warren Buffett has positions in both stocks but a much bigger position in BAC. This week at the Sohn San Francisco Conference Longtail Alpha’s Vineer Bhansali recommended financial stocks in a rising interest rate environment. You can see what else hedge funds were recommending at this conference on our site. We think Bank of America is more likely to benefit from rising interest rates than Visa. Even though we like both stocks, we are more bullish on BAC in the near term.

Apple, Cirrus Logic, GoPro, and More: Here’s Why These Stocks Are On...