Alibaba Group Holding Limited (NYSE:BABA) has seen an increase in enthusiasm from smart money of late. BABA was in 127 hedge funds’ portfolios at the end of the second quarter of 2019. There were 117 hedge funds in our database with BABA holdings at the end of the previous quarter. Our calculations also showed that BABA now ranks 5th among the 30 most popular stocks among hedge funds.

Unlike some fund managers who are betting on Dow reaching 40000 in a year, our long-short investment strategy doesn’t rely on bull markets to deliver double digit returns. We only rely on hedge fund buy/sell signals. We’re going to check out the fresh hedge fund action regarding Alibaba Group Holding Limited (NYSE:BABA).

Heading into the third quarter of 2019, a total of 127 of the hedge funds tracked by Insider Monkey were bullish on this stock, a change of 9% from the first quarter of 2019. On the other hand, there were a total of 117 hedge funds with a bullish position in BABA a year ago. With hedge funds’ sentiment swirling, there exists a select group of noteworthy hedge fund managers who were upping their holdings meaningfully (or already accumulated large positions). 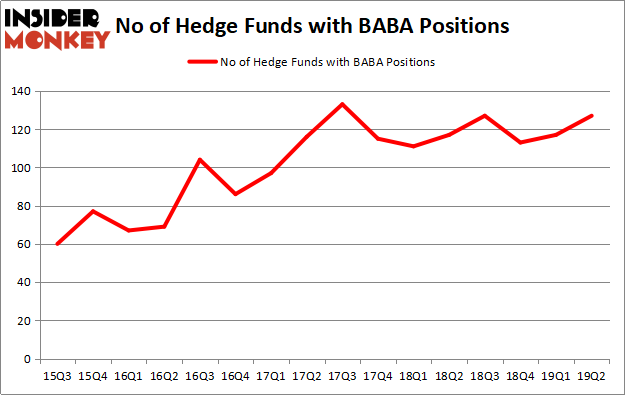 Consequently, key hedge funds have jumped into Alibaba Group Holding Limited (NYSE:BABA) headfirst. D1 Capital Partners, managed by Daniel Sundheim, initiated the largest position in Alibaba Group Holding Limited (NYSE:BABA). D1 Capital Partners had $717.6 million invested in the company at the end of the quarter. Ricky Sandler’s Eminence Capital also made a $259.9 million investment in the stock during the quarter. The other funds with new positions in the stock are OZ Management, Leon Shaulov’s Maplelane Capital, and Gabriel Plotkin’s Melvin Capital Management.