Insider Monkey has processed numerous 13F filings of hedge funds and successful value investors to create an extensive database of hedge fund holdings. The 13F filings show the hedge funds’ and successful investors’ positions as of the end of the second quarter. You can find write-ups about an individual hedge fund’s trades on numerous financial news websites. However, in this article we will take a look at their collective moves and analyze what the smart money thinks of Comcast Corporation (NASDAQ:CMCSA) based on that data.

Comcast Corporation (NASDAQ:CMCSA) investors should pay attention to a small decrease in activity from the world’s largest hedge funds of late. CMCSA was in 86 hedge funds’ portfolios at the end of the second quarter of 2019. There were 87 hedge funds in our database with CMCSA positions at the end of the previous quarter. Our calculations also showed that CMCSA still ranks 18th among the 30 most popular stocks among hedge funds.

Unlike some fund managers who are betting on Dow reaching 40000 in a year, our long-short investment strategy doesn’t rely on bull markets to deliver double digit returns. We only rely on hedge fund buy/sell signals. Let’s take a look at the new hedge fund action encompassing Comcast Corporation (NASDAQ:CMCSA).

How have hedgies been trading Comcast Corporation (NASDAQ:CMCSA)?

At Q2’s end, a total of 86 of the hedge funds tracked by Insider Monkey were long this stock, a change of -1% from the first quarter of 2019. By comparison, 93 hedge funds held shares or bullish call options in CMCSA a year ago. With hedgies’ sentiment swirling, there exists a select group of notable hedge fund managers who were increasing their stakes considerably (or already accumulated large positions). 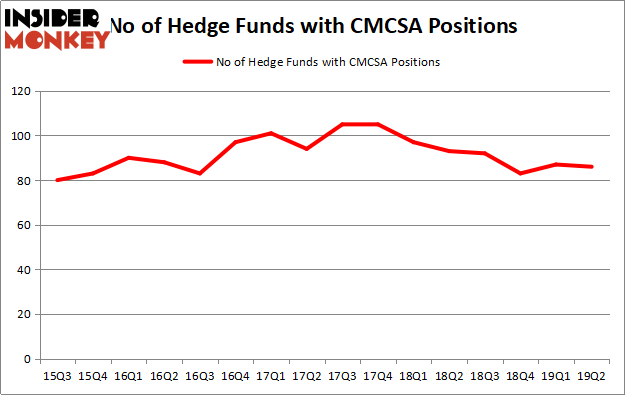 The largest stake in Comcast Corporation (NASDAQ:CMCSA) was held by Eagle Capital Management, which reported holding $1414 million worth of stock at the end of March. It was followed by First Pacific Advisors LLC with a $489.6 million position. Other investors bullish on the company included Arrowstreet Capital, AQR Capital Management, and Southeastern Asset Management.

Due to the fact that Comcast Corporation (NASDAQ:CMCSA) has witnessed a decline in interest from the entirety of the hedge funds we track, it’s easy to see that there were a few funds that elected to cut their entire stakes heading into Q3. Intriguingly, Stuart J. Zimmer’s Zimmer Partners said goodbye to the largest stake of the “upper crust” of funds followed by Insider Monkey, valued at about $129.9 million in stock. George Soros’s fund, Soros Fund Management, also dumped its stock, about $44 million worth. These moves are intriguing to say the least, as total hedge fund interest dropped by 1 funds heading into Q3.

As you can see these stocks had an average of 23.5 hedge funds with bullish positions and the average amount invested in these stocks was $1505 million. That figure was $6540 million in CMCSA’s case. PepsiCo, Inc. (NASDAQ:PEP) is the most popular stock in this table. On the other hand Toyota Motor Corporation (NYSE:TM) is the least popular one with only 8 bullish hedge fund positions. Compared to these stocks Comcast Corporation (NASDAQ:CMCSA) is more popular among hedge funds. Our calculations showed that top 20 most popular stocks among hedge funds returned 24.4% in 2019 through September 30th and outperformed the S&P 500 ETF (SPY) by 4 percentage points. Hedge funds were also right about betting on CMCSA as the stock returned 7.1% during Q3 and outperformed the market by an even larger margin. Hedge funds were clearly right about piling into this stock relative to other stocks with similar market capitalizations.