Like everyone else, top money managers make mistakes. Some of their top consensus picks, such as Amazon, Facebook and Alibaba, have not done well in October due to various reasons. Nevertheless, the data show elite investors’ consensus picks have done well on average over the long-term. The top 25 S&P 500 stocks among hedge funds at the end of June 2018 lost an average of 8.8% through October 26th whereas the average stock in the S&P 500 Index lost 9.5% during the same period. Because their consensus picks have done well, we pay attention to what elite funds think before doing extensive research on a stock. In this article, we take a closer look at Helmerich & Payne, Inc. (NYSE:HP) from the perspective of those elite funds.

Of the hedge funds tracked by Insider Monkey’s custom database, 4% of them were long Helmerich & Payne, Inc. (NYSE:HP) on June 30, with a slight dip occurring during Q2. Nonetheless, the energy company remains fairly popular among hedge funds for its size and was owned by the likes of billionaire Prem Watsa’s Fairfax Financial (344,000 shares) on June 30. Helmerich & Payne, Inc. (NYSE:HP) made the top 10 on our list of the 25 Best Dividend Stocks for Retirement, thanks to its 46-year run of dividend payments.

To the average investor there are plenty of gauges stock traders put to use to evaluate their holdings. Some of the most innovative gauges are hedge fund and insider trading activity. We have shown that, historically, those who follow the best picks of the elite money managers can outpace the market by a superb amount (see the details here).

At Q3’s end, a total of 26 of the hedge funds tracked by Insider Monkey held long positions in this stock, a 4% dip from the second quarter of 2018. The graph below displays the number of hedge funds with bullish position in HP over the last 6 quarters. With the smart money’s positions undergoing their usual ebb and flow, there exists a select group of key hedge fund managers who were boosting their stakes considerably (or already accumulated large positions). 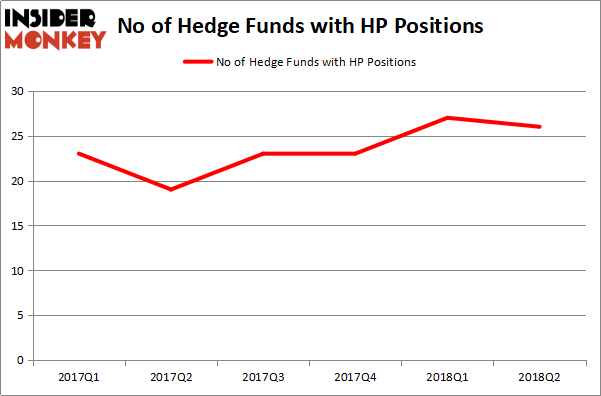 More specifically, Citadel Investment Group was the largest shareholder of Helmerich & Payne, Inc. (NYSE:HP), with a stake worth $58.2 million reported as of the end of June. Trailing Citadel Investment Group was Fisher Asset Management, which amassed a stake valued at $55.3 million. Beddow Capital Management, Sprott Asset Management, and Prem Watsa’s Fairfax Financial Holdings were also very fond of the stock, giving the stock large weights in their portfolios.

Because Helmerich & Payne, Inc. (NYSE:HP) has experienced falling interest from the aggregate hedge fund industry, it’s easy to see that there exists a select few funds that slashed their positions entirely in the second quarter. At the top of the heap, Robert Rodriguez and Steven Romick’s First Pacific Advisors LLC dropped the biggest position of the 700 funds followed by Insider Monkey, valued at an estimated $18.6 million in stock. Vince Maddi and Shawn Brennan’s fund, SIR Capital Management, also dropped its stock, about $8.1 million worth. These bearish behaviors are important to note, as total hedge fund interest fell by 1 fund in the second quarter.

As you can see these stocks had an average of 18 hedge funds with bullish positions and the average amount invested in these stocks was $289 million. That figure was a nearly identical $292 million in HP’s case. Santander Consumer USA Holdings Inc (NYSE:SC) is the most popular stock in this table, while CBSH is the least popular one with only 9 bullish hedge fund positions. Compared to these stocks Helmerich & Payne, Inc. (NYSE:HP) is more popular among hedge funds. Considering that hedge funds are fond of this stock in relation to its market cap peers and that it’s one of the most reliable dividend stocks around, it may be a good idea to analyze it in detail and potentially include it in your portfolio.